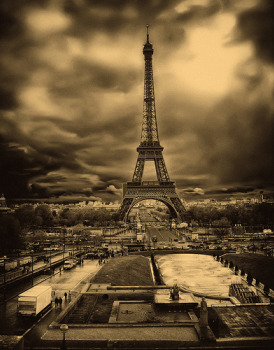 Just before the holidays, I wrote an article about some of the deals on airline tickets to Paris for January. Although they weren’t the cheapest flights to Paris I’ve seen, they’re still lower than you’ll pay if you’re planning a summertime trip to the French capital.
Smart travelers know that winter travel to Europe is always going to be a good way to get more for your money, but if you’ve got your heart set on a warmer vacation there are still ways to visit Paris without losing your shirt. Easily the best way to save money on your trip is to look for cheaper accommodation options – since that’s your biggest expense after airfare – so in this article we’ll take a look at some of the cheaper lodging choices available to you.
Visitors to Paris are lucky because the city has so many options when it comes to where to lay your head. There are lots of hostels in Paris – they tend to be grouped in certain parts of the city, rather than spread equally throughout every arrondissement, but unlike in some places where all the hostels are only in the bad parts of town there are hostels in popular neighborhoods in Paris. The Montmartre area in particular has long been a haven for budget travelers, and it’s home to several of the city’s top hostels.
Another area where you’re likely to find budget beds is the Latin Quarter, which has a long-standing reputation as a popular neighborhood for students. There’s a university in this part of Paris, which is why students are still found all over the Latin Quarter, but this area has become more trendy in recent years. That has made it a little harder to find super-cheap hostels, but there are still a few places in (and just outside) the Latin Quarter that are good options for shoestring travelers.
But even if you’re traveling on a really strict budget, you don’t have to limit your accommodation options to just hostels. Paris is absolutely crammed with hotels at all levels, including a huge number of truly budget hotels. You may find that 1-star hotels (and even many 2-star hotels) are an excellent alternative to hostels – hotels with 1 or 2 stars are sometimes very much like hostels in that there aren’t en suite bathrooms and the rooms don’t have air conditioning, but you won’t have to share the room with people you don’t know. If you’re traveling with friends, sharing a room in a cheap hotel in Paris is a fantastic way to save money.
Even though Paris has lots of choices when it comes to budget accommodation, that doesn’t mean they’re always easy to find. Many hotels put their listings in hostel directories to draw in more budget travelers, and some hostels are small enough to not even show up in some hostel listings. So when you’re planning your trip to Paris – or anywhere in Europe, for that matter – be sure to do your research with tools like this Europe hostel blog or this directory of cheap hotels in Europe to make sure you don’t miss anything.
photo by Reinante El Pintor de Fuego