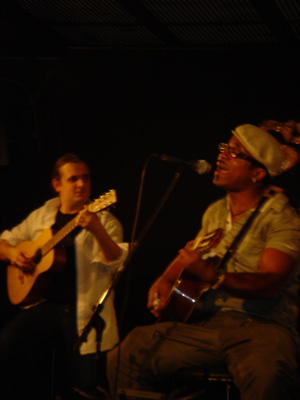 Blick Bassy and his ‘équipe -complètement sympathique’
Photo by Chris Card Fuller ©2008
Those of you who were there last night for th Blick Bassy concert know! This is a great spot for world music fans in the Oberkampf neighborhood. Admission for concerts is usually 10 Euros. Beers are pricey at 5 Euros but not priced much higher than many Paris cafes. It’s well worth the good music!!
We had to leave before the second set to catch the Metro, however the first set was ample time to appreciate the artist’s honey smooth voice. For a Tuesday night in Paris, a very respectable turn-out – tonight (April 2, 2008) Blick Bassy performs alongside Jaylou at another venue La Bellevilloise in the 20th arrond. Metro: Gambetta .
If you like a low key ambiance where you can listen to music at a non-deafening decibel level, have a conversation with your friends, this is a good spot to kick off your Paris trip. Concerts are usually held during the week, so you’ve got your weekends free for clubbing.
We will go again.
Satellit Cafe
44 Rue de la Folie Mericourt
Metro: Oberkampf
Open Tuesday through Sunday Opens for drinks at 8 pm . . .