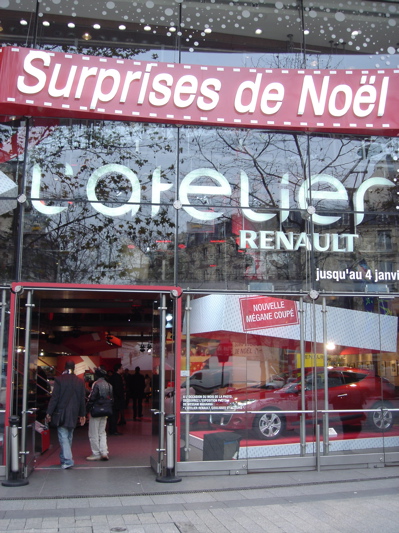 Renault has come up with a prototype car that might get Saint Nick thinking about giving his reindeer team a vacation in the near future. Here’s a set of wheels designed specifically for long-haul trips from the North Pole. 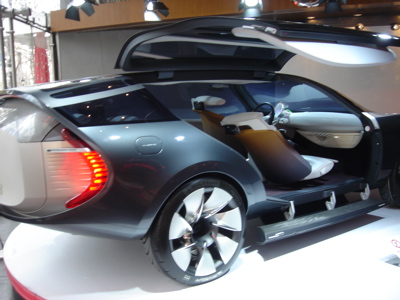 Renault’s design director Patrick Le Quement describes the Ondelios prototype (currently on display at the Champs Elysees Renault atelier) in this way:
“Ondelios is inspired by motion rather than speed and is a whole new response to the call of the open road.”

Even if you’re not a car buff, you may find yourself swooning at the futuristic design of this 4.8 meter-long, 1.6-meter high hybrid that appears to have melded the best aspects of aviation design to accommodate passengers and drivers.

Although I didn’t have the privilege of climbing into this vehicle (much less going for a ride), I have to believe that passengers must feel pretty close to airborn when this engine goes into motion. (And isn’t airborne ‘road travel’ the way of the future anyhow? (Saint Nick’s nodding his head) 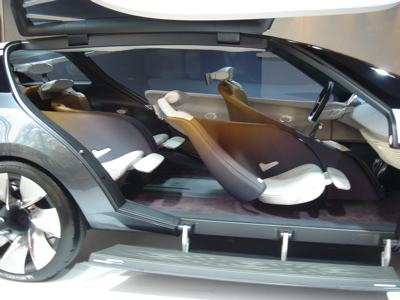 This hybrid is equipped with two electric motors, front and back.
The configuration of the rear electric motor allows the capability of 4 wheel drive thanks to ESP sensors that can detect loss of traction.

This is a roomy, luxury ride which comfortably seats six (great for touring the French countryside). The electric motors work in tandem with a diesel engine which can take the Ondelios from a standing start to 100 kph in just 7.8 seconds. 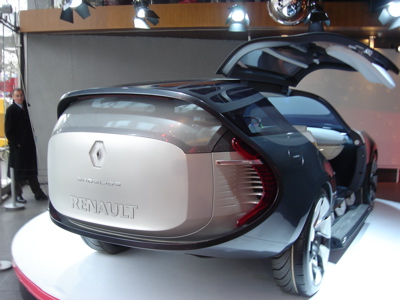 And now that you’ve had the chance to marvel at the Ondelios craftsmanship, you’re probably wondering how much such a ride might cost. There’s no sticker on the window of this baby. Why? Because it’s not for sale.

Yeah, you’ve gotta love the French spirit when it comes to beauty for the sake of beauty. The Ondelios prototype that’s currently on display at the Renault atelier is a one-of-a-kind. Perhaps, eventually, the Ondelios will be commercially produced, but for the moment, Santa’s team of reindeer has no chance of early retirement.

As one American friend recently commented, “When it comes to automotive design the French have always been very innovative – thinking outside the box.” You may remember in past posts, Parisgirl has enthused over the innovative attributes of the Citroen DS with some features way ahead of its time in the fifties and sixties).

I can even get excited about some incredibly simple but useful features in recent years – such as window wipers that automatically start moving when the first few drops of rain hit the windshield.

More about the Renault atelier on the Champs Elysees

Up until 1999, the Atelier used to be called the ‘Pub Renault’. This was not only a place where you could look at the latest Renault models, but enjoy huge ice cream sundaes at the back of the showroom. Since 2000, the ‘atelier’ Renault has been a place “to discover new faces and new ideas” being neither a showroom, nor an outlet.

The Champs Elysees has traditionally been the premier venue for prestigious car showrooms. Even though, over the years, the number of car showrooms have dwindled, Renault remains a must for Champs Elysees window shoppers. Be sure drop in to see the latest models – even if you don’t plan on taking one home in your suitcase!