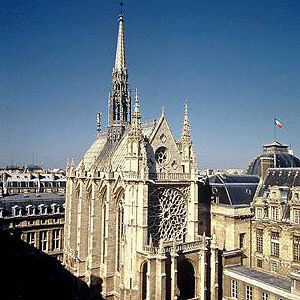 The magnificent Gothic cathedral of Notre Dame is so splendid that you really could be forgiven for overlooking – really, for not even knowing about – the other impressive Gothic church on the Île de la Cité. But once you’ve seen the elegant and ethereal Sainte-Chapelle, you’ll never look at the words “Gothic church” the same way again.

La Sainte-Chapelle is a relatively small church with two chapels (an upper and a lower) that’s completely within the walls of the old royal palace, which is now the Palais de Justice. It’s partly because of the church’s small size that it’s able to architecturally accomplish some of the things that make it so special – including the soaring heights of the upper chapel seemingly without the usual requirement of flying buttresses for support. But we’ll get to that in a minute.

The chapel was built in the mid-13th century by King Louis IX as a place to hold the holy relics he’d acquired – so in one sense, the entirety of Sainte-Chapelle can rightly be considered a reliquary. The relics Louis had purchased (yes, he bought them, as opposed to other rulers over the ages who have just gone and stolen stuff) included the crown of thorns allegedly worn by Christ at the time of his crucifixion and a piece of the true cross, and all the relics cost him almost three times what the construction of Sainte-Chapelle cost. Look at the spires for a representation of the cross, as a reminder of what the church once held. (Don’t look for the relics in Sainte-Chapelle today, however – some are in Notre Dame now, while others were lost during the French Revolution.) 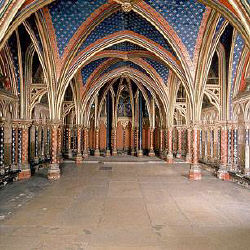 Sainte-Chapelle’s lower chapel was designed for servants who worked in the palace. It’s only about half the height of the upper chapel, and can feel a bit dark (especially in comparison to the light show upstairs), but do take a moment to admire the beautifully-painted columns and the ceiling. You’ll see the trademark French fleur-de-lys painted everywhere. There’s a spiral staircase in the corner that will take you up the stairs to the upper chapel.

And it’s this upper chapel that is Sainte-Chapelle’s crowning glory – it seems impossibly narrow and tall, and while I remember being enthralled by the ceiling (painted a deep blue and covered with painted gold stars), the true highlight of the upper chapel is the array of stained glass windows which surround you when you’re standing in it. There are 15 windows in all and they show scenes from both the Old and New Testaments. It’s said that in order to fully appreciate the windows, you’ve got to visit when the sun is shining. 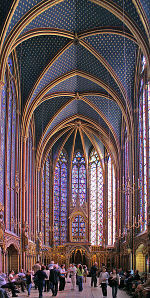 What’s even more remarkable than the windows themselves, however, is the fact that the walls are almost entirely made of them – you’ll notice when you look around that the space between the windows is pretty narrow, and it’s certainly not enough space to have a flying buttress on the outside holding this impressive structure up. What’s more, even if there was enough space for a flying buttress or two, they’d be blocking all of that glorious light from even getting into the church. So what’s the magic here?

Rather than magic, it’s clever architecture. The extreme narrowness of the church meant that flying buttresses didn’t have to be so massive, or reach out so far beyond the church’s walls. In addition, this church is considered by many to be the pinnacle of Gothic architecture – so architects had learned enough by the time it was built to be able to support such a tall structure with only the bare minimum of exterior support. You’ll see the support pieces outside the church, but you wouldn’t recognize them as flying buttresses!

Also worth noting is the upper chapel’s enormous rose window, which is made up of more than 80 panels and tells the story of the Apocalypse. This beautiful window was a gift from Charles VIII in the late 1400s, and it’s said that the best time to see it from inside Sainte-Chapelle is at sunset.

Sainte-Chapelle was heavily damaged during the French Revolution, and many of its interior furnishings were stolen or destroyed. The original windows were removed for safe-keeping, however, as they also were during both World Wars, so that today most of the windows you see are original. The church underwent a restoration in the 19th century when the lowest section of windows had to be replaced.

Location: 4 Boulevard du Palais, inside the Palais de Justice, Île de la Cité
How to Get There: On the Metro line #4, take the Cité stop; bus lines 21, 27, 38, 85, 96 and Balabus stop nearby
Hours: Open daily; March 1 through October 31 – 9:30am to 6:00pm; November 1 through February 29 – 9:00am to 5:00pm
The ticket windows close 30 minutes before the church closes.
The church is closed on January 1, May 1, and December 25.
Admission: €7.50 (adults), €4.80 (ages 18-25; those under 18 are free), €5.70 (per person group rate for groups of 20+ people)
Good to Know: Because Sainte-Chapelle is located entirely within the walls of the Palais de Justice, you’ll need to pass through security before you can even buy your tickets to get into the church. It’s airport-style security, with a metal detector and an X-ray for your bags, and you’ll have all sharp metal objects removed from your person before you’re allowed to go through. In other words, leave the Swiss Army knife in your hotel room.
For those visiting during the months of March-November, if a daytime tour isn’t enough, ask about the concerts that are held in Sainte-Chapelle.
More Information: Official Sainte-Chapelle website