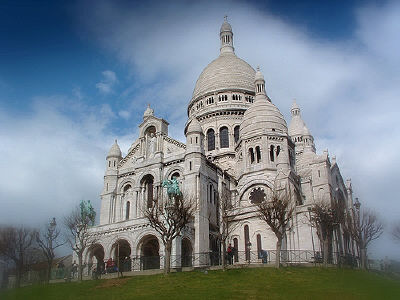 The first time I visited Paris on a school trip from my study abroad home base in England, I was taken by so much about the city – everywhere I turned it seemed like there was something beautiful. But one building still stands out as having made such an impression on me during that first visit that it remains one of my very favorite spots in the entire city. That building is the Sacre Coeur Basilica in Montmartre.

While I was prepared for the grace of the Eiffel Tower and the grandeur of Versailles, I think the elegance of Sacre-Coeur took me by surprise. This was a church I hadn’t heard of prior to my first visit to Paris, and when I followed my classmates up the hill at Montmartre in search of cheap eats and good views, I remember rounding the corner and finding myself in front of a glowing white church with egg-shaped domes and a commanding position overlooking the city. My friends and I sat on the steps in front of Sacre-Coeur for hours as the sun set, munching on crepes filled with Nutella and turning away the various dreadlocked men who offered to weave colored strings into our hair for a few francs. And I’m not joking when I say that there was accordion music drifting through the air from some unidentified street musician in the background. That evening was everything a Parisian evening should be, so it makes sense to me that Sacre Coeur remains so close to my heart. 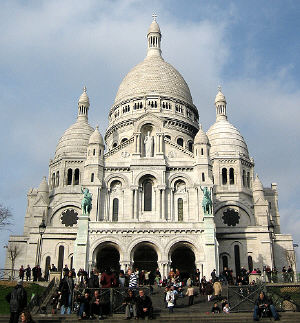 It wasn’t until a return trip to Paris many years later, however, that I finally set foot inside the basilica or bothered to learn anything about it! So I thought I’d share some of the things I learned with you, so that you can experience both the magic of Sacre-Coeur and also understand a bit of the history as well.

The Sacre Coeur Basilica, or Basilique du Sacre Coeur in French, is relatively new in terms of Parisian architecture. Construction began in 1875 according to a design by the French architect Paul Abadie, whose design beat out more than 70 others in a competition. Although Abadie died in 1884, long before the completion of the church, his design was carried through by the people who oversaw the construction after he died. The basilica was finally finished in 1914, although it wasn’t dedicated until after World War I ended, in 1919.

While many travelers are familiar with the sharp angles and flying buttresses of Gothic cathedrals like Notre Dame, the rounded domes of Byzantine design are less common in Western Europe (St. Mark’s Basilica in Venice is a great example of Byzantine architecture) – so it’s not surprising that an interpretation of Byzantine architecture such as Sacre Coeur looks out of place in what we consider an old city. What’s interesting to me is that the design was even unusual when it was first proposed – and yet it still won the competition. To my eyes, Abadie succeeded in creating something that was ahead of its time in the 19th century and remains sort of avant-garde even today. 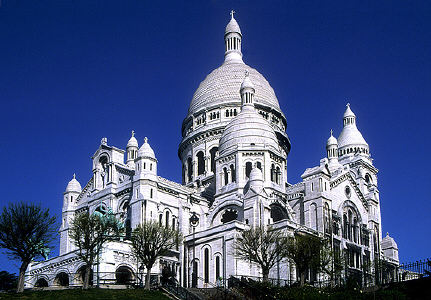 As mentioned, one of the things that stood out to me when I first saw Sacre Coeur was its brilliant whiteness, and when I thought back on it I figured it must have just been cleaned in order to be so bright. In fact, the travertine stone that makes up the basilica contains a substance which keeps it sparkling white even after years of soaking in the pollution of Paris’ atmosphere. So not only will you always get a view of a beautifully bright church when you visit, you also won’t have to worry that it’ll ever be covered in scaffolding as the outside gets cleaned. 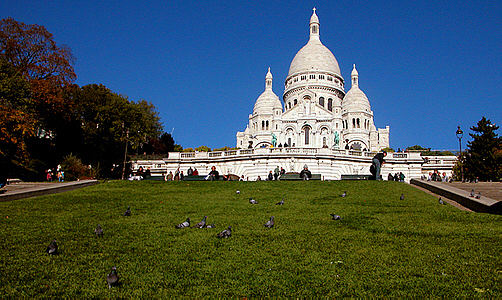 In addition to visiting the inside of the basilica and enjoying the view from its steps, you can also climb into the tallest dome and check out the crypt below the church as well. The dome is the second-highest viewpoint in Paris behind the Eiffel Tower, and you can walk around inside the dome once you’ve climbed to the top as well. The crypt contains what some believe is the Sacred Heart of Christ, where the basilica gets its name. 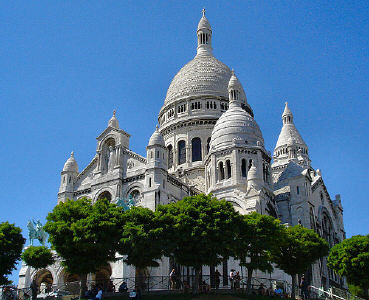 Some interesting trivia about Sacre Coeur, which you should feel free to bring up at cocktail parties:

>> Check out Miss Expatria’s post for a few simply gorgeous photos of the view from the front steps of Sacre Coeur; the winter fog makes them even more beautiful in my opinion, despite knowing how cold it must have been when they were taken!

Location: Basilique du Sacre-Coeur de Montmartre, Pl. du Parvis-du-Sacré-Coeur, 18e, 75018 Paris
How to Get There: You can take the Paris Metro to the Abbesses stop and then take the Funiculare to the top of the Montmartre hill (or walk!), or take the Metro to either Pigalle or Jules Joffrin and take the Montmartrobus up the hill. Bus lines 30, 31, 80, and 85 get you closest to the basilica. If you’re driving, there’s a parking lot at Anvers, and then it’s a hike up the hill.
Hours: Daily, 6am-11pm; climbing the dome or visiting the crypt is available from 9am-7pm (6pm in winter).
Admission: The basilica is free, but to climb the dome or enter the crypt it’s €5 (it’s a combo ticket for both).
Website: The basilica’s official website is here.
Tips: If you’d like to visit Sacre-Coeur for a service, you’re welcome to. Services are held at various times every day of the week – check the posted schedule for times.