Sacre Coeur – the Antidote to Frivolity? 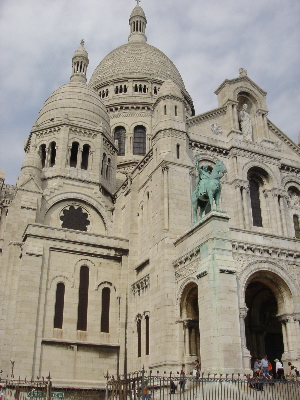 Photo by Chris Card Fuller ©2007
For years we’ve been visiting the Sacre Coeur perched on top of the Buttes de Montmartre. It’s one of my favorite Paris landmarks, its gracefully rounded white stone dome rises above the city like a calming beacon. Going to Montmartre is always an expedition because to do so we need to either hop on the bus No 95 at Montparnasse, or take a fairly long Metro ride from the Left Bank, to the northern reaches of the Right Bank, stopping off at either Anvers, Barbes, or Blanche. Although we almost always take a walk through the interior of this church which is relatively ‘new’ compared to most Paris cathedrals ( it was inaugurated in 1898. Construction wasn’t finished until the 1920s), we always finish up a visit to Montmartre by walking around Place du Tertre.

People come to Montmartre to see the artists painting in the Place du Tertre, to admire the view of Paris from the hilltop and to capture what so many visitors consider to be the Parisian ambiance of bohemian life.

What I didn’t know was that Sacre Coeur was constructed for two reasons. The ‘official’ reason was as a prayer for world peace. Even before the end of the 19th century, the Franco-Prusssian War had brought occupying forces to the city of Paris, and it was hoped that the new 20th-century might bring an era of peace – as we know, two world wars followed in spite of good intentions.

The second reason for building Sacre Coeur was the hope that the hovering dome might discourage the libertine nature of the neighborhood which had become so associated with debauchery and loose values – that even the middle-classes were being lured toward the hill top.

Whether or not the Sacre Coeur has had a moderating influence on the bohemian lives of its residents is a question I can’t answer – being a Montparno. One thing is certain, many of the artists of that era were more often than not forced to relocate due to the increased cost of rents. Montmartre became an early example of ‘gentrification’.
Montparnasse has followed in this direction.