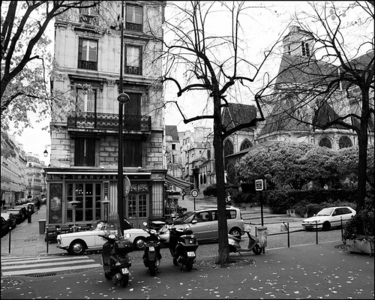 As a visitor to Paris you’ll cross the Seine River so many times you may not even realize what side you’re standing on at any given moment. But when you’re planning where to stay in Paris, you might want to give that river more thought.

There are hostels on both sides of the river, but in this post I’m just going to cover Right Bank hostels in Paris.

The Right Bank is traditionally more well-to-do, although the differences have faded over the years so that much of the Right Bank looks and feels like much of the Left Bank now. Some of the Right Bank’s 14 arrondissements don’t have much in the way of hostels, while others have a pretty high concentration – as you can see on the map below.

This map shows some of the Paris hostels on the Right Bank, along with a few of the area attractions. You can learn more about each hostel by clicking on the icon on the map, or you can scroll down to read a brief description about the hostel as well. I’ve listed them in alphabetical order.

Hostels on the Right Bank in Paris

Absolute Paris Hostel
1 rue de la Fontaine au Roi – 75011 Paris
Absolute Paris is in the 11th arrondissement of Paris, right in front of the famous Canal St. Martin. It’s roughly a five-minute walk to Republique, where you’ll also find the nearest Metro station. You can get to The Marais in 10 minutes on foot, and to the Eiffel Tower in 20 minutes by Metro.

There are 95 beds in the hostel, and all the rooms have en suite bathrooms. There’s an elevator in the building, and internet access is available. Absolute is most accurately called a budget hotel, as most of the rooms are singles, twins, or triples – but there are some dorm-style rooms where you can pay for just a bed instead of reserving the whole room.
>> Book Absolute Paris Hostel

Blue Planet Hostel
5 rue Hector Malot – 75012 Paris
Located in the 12th arrondissement, Blue Planet Hostel is the closest to the Seine River of the hostels on this list. It’s also practically next door to Gare de Lyon train station, so getting in and out of Paris when you arrive and depart is made quite simple. The hostel is among the closest on this list to major sights like the Louvre and Notre Dame Cathedral.

The hostel offers the same price year-round, so you don’t have to worry about arriving just as they’ve jacked up the nightly rate for the high season. You’ll get a free breakfast with the price of the bed, but linens and towels aren’t included – bring your own or rent them there.
>> Book Blue Planet Hostel in Paris

If you’re staying in the dorm, you’ll get WiFi as well as breakfast for free. If you choose a private room, you’ll have to pay for the breakfast. This hostel does have a 2am curfew, in case that cuts into your party time.
>> Book Caulaincourt Square Hostel in Paris

Peace & Love Hostel
245 Rue La Fayette – 75010 Paris
Peace & Love Hostel makes this list because it’s on the Right Bank, but it’s better known for its atmosphere than its location. This is one of Paris’ best party hostels, so unless you’re interested in doing more socializing than sleeping you might want to browse other hostels on this list.

This hostel has an age restriction, for perhaps obvious reasons, of 18-35 years old. There’s an incredibly popular on-site bar and no curfew. It’s not far from two major Paris train stations – Gare de Nord and Gare de l’Est – so transport in and out of the city is easy. Linens and towels are included with the nightly rate, but breakfast and internet access aren’t.
>> Book Peace & Love Hostel in Paris

Perfect Hotel & Hostel
39 rue Rodier – 75009 Paris
Perfect Hotel & Hostel is another hostel in Montmartre, but this one is really just a budget hotel – there aren’t even dorm-style rooms you can book by the bed. But because the prices are really good (especially for Paris), it still gets included on this list.

The key to making this place more like a hostel is to be traveling with 1-2 friends so you can book out an entire double or triple room but still pay a great low rate per person. Linens, towels, and breakfast are all included with the price, but note that some rooms don’t have en suite bathrooms.
>> Book Perfect Hotel & Hostel in Paris

St. Christopher’s Paris
159, rue de Crimee – 75019 Paris
St. Christopher’s may be a familiar name to you if you’re someone who’s done any amount of travel in Europe and stayed in other hostels. This hostel chain has well-known hostels in several of Europe’s big tourist cities, and many of them are just as famous for their on-site bars as they are for their bargain beds. St. Christopher’s Hostel in Paris is no exception, as it’s got a Belushi’s Bar right in the hostel. This is one of the reasons the hostel makes the list of the party hostels in Paris, too.

This hostels is in the 19th arrondissement not far from Montmartre, and it’s also near two Metro stations so it’s easy to get around the city. It just opened in January 2008, so it’s fairly new, and has a grand total of 300 beds. Linens, breakfast, and WiFi are all included in the price, but you’ll need to bring your own towel or rent one there.
>> Book St. Christopher’s Hostel in Paris

Village Hostel
20 rue d’Orsel – 75018 Paris
Village Hostel (also called Le Village Hostel) is at the foot of the Montmartre hill and not far from the Sacre Coeur Basilica, and the hostel even has a terrace with a view of the pretty church. There are private rooms as well as dorm-style rooms, so you can choose one or the other depending on how social you’re feeling.

The hostel has an on-site cafe, and breakfast is included in the nightly rate. Linens and towels, however, aren’t included – so you’ll need to bring your own or rent them at the hostel. There’s internet access available in the common room, and there’s no curfew.
>> Book Village Hostel in Paris

The hostel’s bar is open until 2am (which is the curfew), and there’s a lockout period during the middle of the day for cleaning. You’ll get breakfast and WiFi access for free with your bed, but linens and towels aren’t included. You can rent them on-site or bring your own.
>> Book Woodstock Hostel in Paris