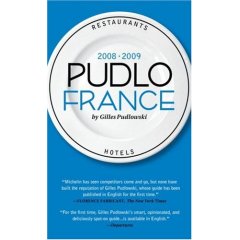 Pudlo France 2008/2009
By Gilles Pudlowski
Publisher: The Little Bookroom
Price:$29.95
Foodies who’ve been following in Gilles Pulowski’s ‘foodsteps’ with his past Pudlo guides to Paris restaurants will be eager to take a look at his exhaustive listing of worthy restaurants AND hotels throughout France.
This 1,193 page tome is easy to follow. Cities are listed in alphabetical order. 125 Pages are devoted just to Paris where restaurants are listed according to their arrondissement.
I particularly like the fact that the guidebook includes regional maps of France IN COLOR with each departement clearly outlined. That may not seem important before you arrive in France, but the more time you spend in France, the more you’ll want to be able to quickly identify different departements.
Pudlo’s rating system is simple to follow and it’s unpretentious. Instead of stars (like Michelin guides), an excellent table merits two plates and a grand table merits three plates.
Pudlo rates hotels and restaurants covering the entire gamut of price ranges, so even if you don’t have Euros to burn, you should be able to find a good hotel or restaurant within your budget. Even though some of my favorite restaurants in Montparnasse didn’t make it into this year’s guidebook (Les Iles Marquises, Giufeli, Pannetone, Cote-Cour and none from Rue Daguere), I’ve tried a number of the restaurants that did make the cut – and generally agree with Pudlo’s descriptions.
Food First
Keep in mind that Pudlo is first and foremost about food. That being said, some surprisingly reasonably priced hotels have been ferreted out in the less touristy Paris neighborhoods. An example would be the Hotel Croix de Malte at 5 Rue de Malte in the 11th arrondissement (Metro: Republique). At 75 to 95 Euros for a room, this is quickly becoming a rarity in Paris (I have found 50 Euros rooms in the Montparnasse district, but perhaps Pudlo’s criteria are more rigorous).
If you’ll be using this guidebook specifically for finding restaurants while you drive through France, you can rest assured that Pudlo has deviated from the main highways to unearth the cute and the quaint. For example, I was surprised to see Norman country restaurants (in Calvados): La Paquine in Ouilly-du-Houley (Try to say that four times, really fast and heaven help you if you have to ask for directions to Ouilly); and the second surprise was Les Deux Tonneaux in Pierrefitte-en-Auge. Both of these restaurants are definitely off the beaten track.
Charming Hotels or Simply Comfortable?
Given the vast undertaking of listing hotels for so many towns in France, not every town may have been so clearly mapped out. For example, the Mercure hotel in Lisieux, Normandy is listed as being next to the basilica. Because, I’m a walker, three kilometers isn’t a big deal – when there’s a sidewalk, but in this case, there’s only a sidewalk for a portion of the walk. If you plan on driving from the Mercure to the Basilica, you might consider 3 kilometers to be ‘next to the St. Therese Basilica’.
Getting back to Paris . . .
I was surprised that the Meridien Hotel was listed in the Paris’s Montparnasse district, but not the Hotel Concorde which is right across the street from the Meridien on Rue Commandant Mouchotte. This might be due to the fact that the Meridien boasts a Michelin star restaurant (Montparnasse 25). The hotel has just gone through major room renovations this year (so future guests hopefully won’t be bothered with the sound of hammering!). There are also a LOT of tour groups at the Meridien.
The choice of hotels for the Paris listings tend to span not only various price ranges but also various styles. I was able to find plenty of ‘boutique hotels’, some ‘Mom and Pop’ hotels, and the huge contemporary-styled chain hotels which would be helpful for larger groups or for business conferences.
However, if you’re looking specifically for ‘charming hotels’ throughout France, this may not be the optimal resource. After a great dining experience, a comfy place to rest your head for the night, might be more than enough. One thing is certain, when you bring Pudlo France in your suitcase, don’t forget to bring along a good appetite.