Renting a car in Paris? Do it at Versailles. 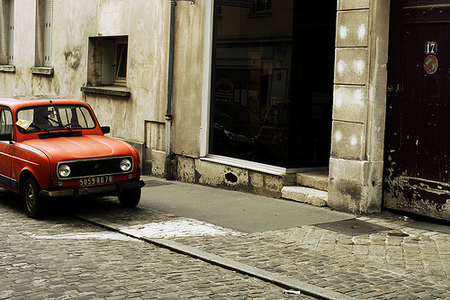 Talk to anyone who’s spent any length of time visiting Paris and they will, probably to a person, say you should not – under any circumstances – rent a car in Paris. Getting around Paris is simple, fast, and cheap using public transportation, and even if the roads were all huge and traffic-free you’d still have to contend with the headache of parking in this crowded city.

What I’m trying to say is that there is no logical reason to rent a car if you’re staying in Paris.

If your France vacation has you spending time in the rest of the country after arriving in Paris, however, then a car can be a great option. The TGV makes getting around by train fast and easy, but if you want to get a bit further into the French hinterlands or have more control over when and where you stop – or if you’re traveling with a group where it just makes more sense economically to split the cost of a car – then driving in France isn’t a bad idea.

Renting a car in Paris, however, still is.

But here’s a tip that many travelers to Paris don’t know. When you’re done with your time in Paris and are going to be heading to Provence, or the French Riviera, or Burgundy for the next part of your vacation, instead of renting a car in the heart of Paris or heading out to Charles de Gaulle Airport to use one of the car rental companies at the airport, take the RER train from Paris to Versailles and rent a car there.

Now, I’m not suggesting that the organization which runs the Chateau de Versailles has a side gig renting cars. I’m saying that the town called Versailles is the ideal place to rent a car for the rest of your France trip. Because Versailles is equally easy to reach via the RER train as is CDG airport, but far less crazy-busy than the massive airport, it’s become the perfect place for travelers in the know to pick up or drop off their rental cars.

For more tips about getting around France, see the following articles: