Quick Carbo-loading before the Paris Marathon 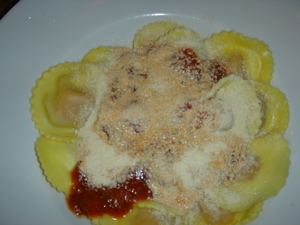 At 7.90 Euros, this Pasta Arrabiata is delicious and affordable! 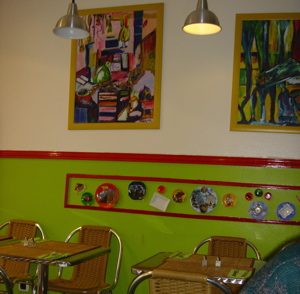 Photo by Chris Card Fuller ©2008
Pasta Break
53 Rue Montparnasse
75014
01 43 27 60 79
You may want to join the throng at the Paris Marathon Expo – or if you want to enjoy your pasta in more tranquil surroundings, I would recommend
Pasta Break for excellent pasta and the chef’s own sauce starting at 5.90 Euros to 7.90 Euros.
Located at 53 Rue Montparnasse, you can hop on the Metro at Edgar Quinet, and it’s a straight shot to Charles de Gaulle-Etoile where the Paris Marathon begins this Sunday (April 6, 2008). You’ll find lodging in the Montparnasse neighborhood to be more reasonably priced (for the most part) compared to the pricey Right Bank, particularly around Etoile and the Champs Elysees. 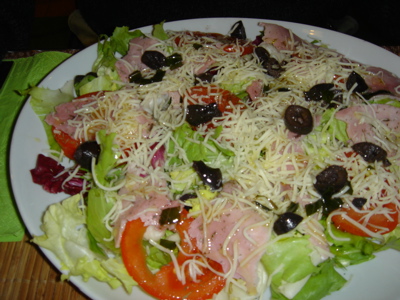 Of all the pasta ‘joints’ in town, why have I picked out Pasta Break?
First of all, we popped in at 2:45 pm (the restaurant normally closes between 3 pm and 6:30, but the proprietor was perfectly willing to set us up with a plate of pasta and his Arrabiata sauce. He is very modest about the quality of his sauce – but if you’re a pasta sauce fanatic – like I am, you’ll know when it’s done right. Living for several years in the south of France right at the border with Italy certainly has something to do with the elements that seem to bring a little essence of the sunny south to drizzly Paris.
You have to try this sauce. It’s REALLY YUMMY. If you’re looking for big portions, I would suggest the tagliatelle (which is what we call linguini in the US). The salmon filled and cheese filled half-moon pasta are also excellent but cost more – 7.90, and are smaller portions). This is plenty for the average appetite, but maybe not enough if you’re carbo loading for a race.
You can also order large salads and a Nespresso coffee. (Be sure and check out the Nespresso coffee maker!) The decor is green, refreshing, and extremely tidy. This is a small ‘fast pasta’ place where you can enjoy good food but you’ll be served quickly so that you have plenty of time to prepare for the big day. Or, if you’ve finished your race and still want to linger a few days to explore Paris, you can use Rue Montparnasse as your starting point. 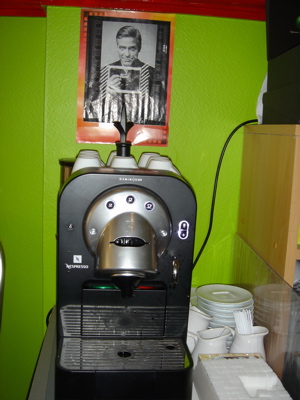 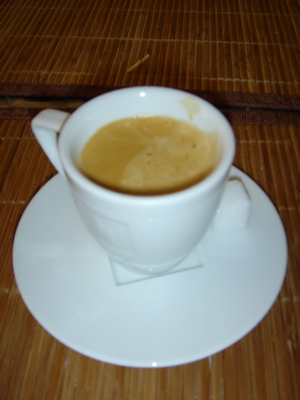 From here, it’s a short run over to the Jardin du Luxembourg (take Rue Vavin which will bring you right into the park’s corner entrance. Or, run up to Denfert Rochereau, take Avenue Rene Coty (at the Belfort Lion intersection) and you’ll run into Parc Montsouris. Of the two parks, Parc Montsouris is my favorite jogging park.
How to get there: Rue Montparnasse (not to be confused with Blvd. Montparnasse is a narrow street famous for its creperies (also reasonably priced). The most direct route is from Metro: Edgar Quinet, but you can also exit from Metro: Montparnasse or Metro: Vavin. From the Edgar Quinet exit, several streets spin off like wheel spokes – Rue Odessa, Rue Montparnasse, Rue Delambre, and Rue de la Gaite. Be sure you take the right street, or just backtrack to Edgar Quinet. You can also find Rue Montparnasse by walking along Boulevard Montparnasse but be sure not to miss this street which is easy to bypass (Rue Montparnasse also heads toward the Luxembourg Gardens (if you pass Hotel Danemark, you’ve gone the wrong way). You want to stay on the side of Blvd. Montparnasse where you’ll see Le Dome and La Coupole.
Another suggestion for quick Carbo loading is Joya Food Concept on Rue d’Assas in the trendy St. Germain-des-Pres neighborhood. No need to worry about communication problems. The owner is American and at least one of his staff members is a flight attendant when she’s not dishing up pasta.
Both of these pasta bars serve good wine with their pasta. You can order a ‘quart’ or 25 cl of house wine with your pasta (if the race is over) or if you’re not running in the Marathon – or if you don’t care about drinking wine before the marathon) and you won’t be disappointed with the quality.
Joya Food Concept
15 Rue d’Assas 6th arrond.
Metro: St. Sulpice/Rennes
www.joyafoodconcept.com