Pere Lachaise Cemetery in Paris: Where the In Crowd is Buried 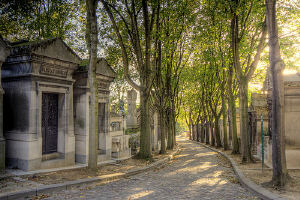 I’ll be the first to admit that on my first visit to Paris, after the big-ticket items like the Eiffel Tower and the Louvre Museum one of the things I most wanted to see was Père Lachaise cemetery – in fact, my French cousins were so amused by my fascination with the cemetery (they really didn’t see the point) that they found an old book about it and gave it to me. I still don’t read French, so I have no idea what gems are contained within that book, but I still have it – along with a lasting love for Père Lachaise.

Now, I’ll also admit that when I first visited Père Lachaise (yes, I’ve been there multiple times) it was primarily to visit the grave of former Doors lead singer Jim Morrison. I’m not now, nor have I ever been, a massive fan of The Doors – but Morrison’s tomb is at least as famous as the man ever was, so I had to see it for myself. Little did I know how many other famous tombs I’d see there.

>> Some of the most famous graves in Paris are in Pere Lachaise, but there are other cemeteries where you can find celebrities, too! 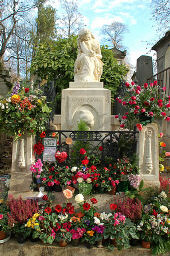 Père Lachaise is not only the largest cemetery in Paris, it’s one of the world’s best known cemeteries. Certainly this is partly due to Morrison’s grave, but the cemetery is almost literally packed with so many famous names that even someone who had no idea who Jim Morrison was would find someone to be impressed by. What’s amusing about that is the fact that when the cemetery was originally built in 1804, it was deemed too far from the city, so few people chose to be laid to rest there. It wasn’t until nearly 1820 that cemetery administrators had the bright idea of moving some famous remains to Père Lachaise – and it wasn’t long until ordinary folks wanted to be buried in the same cemetery as the notables. Even in death, they wanted to be in with the in crowd.

The list of famous names who are buried at Père Lachaise is almost overwhelmingly long, and the cemetery itself is so maze-like that I suppose I shouldn’t have been surprised to find a vendor selling Père Lachaise cemetery maps at the entrance. But I bought one, and I’m so glad I did – it was excellently laid out and well marked, and I had no trouble finding every single tomb and grave marker that I wanted to. 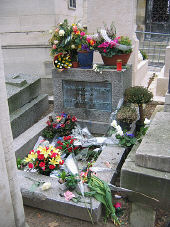 Sadly, although Morrison’s grave is certainly one of the most-visited in the cemetery, the people who tend to flock to it aren’t always the most conscientious. When I first saw it, all the graves surrounding Morrison’s were covered with several years’ worth of graffiti, and even further away from his grave you could find the word “JIM” painted on random walls with arrows pointing in the direction of his gravesite.

As you can imagine, this doesn’t sit well with the families of the people whose graves have been defaced, so the Père Lachaise administrators have been working over the years to remove the graffiti and discourage any more. One of the ways they’ve done this is to have more security roaming the cemetery, and I’ve even heard reports that they’ve hired a full-time security guard for Morrison’s grave. I find that a little hard to believe, but it’s probably the only thing that would really stop the vandalism.

On the other hand, I also saw someone pour an entire can of beer onto Morrison’s grave once, and I couldn’t help but think, “Hmm, I’ll bet Jim would have really loved that gesture.”

Some of the people buried at Père Lachaise are:

Here are some photos of the famous graves in a video & set to music – it’ll give you a feel for the place, and show you that even the non-famous people have some pretty cool graves sometimes.

Location: 16 Rue du Repos in the 20th arrondissement, on a hill overlooking the city
How to Get There: Luckily, even though it’s a bit outside the city center, there are three Paris Metro stops you can use to get to the cemetery. The one called Père Lachaise is on Metro lines 2 and 3 and puts you close to a side entrance of the cemetery. The one called Philippe Auguste is on line 2 and is closest to the main cemetery entrance. The one called Gambetta is on line 3 and is closest to Oscar Wilde’s tomb and the highest points of the cemetery grounds.
Hours: November 6 through March 15: Monday-Friday, 8:00am to 5:30pm; Saturday, 8:30am to 5:30 pm; Sunday & public holidays, 9:00am to 5:30pm
March 16 through November 5: Monday-Friday, 8:00am to 6:00pm; Saturday, 8:30am to 6:00pm; Sunday & public holidays, 9:00am to 6:00pm
The gates close to new visitors 15 minutes before closing time each day.
Admission: Free
Good to Know: Before you go in, find someone selling a walking map of Père Lachaise and buy it. They’re not for sale at the guard huts at the entrances to the cemetery, but most of the florists and news stands in the area will have them. Once you get inside the cemetery, you’ll be glad you hunted a map down; and besides, the cemetery’s free, so you can afford a few euro for the map!
Also before you go in, empty your bladder. Yes, there are toilets in a few places inside the cemetery, but in my experience they’re not places that ladies are going to want to go into, and they never seem to have toilet paper, either. Just go before you go in, that’s all.
More Information: There is an awesome interactive “virtual tour” of Père Lachaise which is well worth playing around with. The plus-signs mark the locations of famous gravesites, and you can also search by name or even just the first letter of the last name.