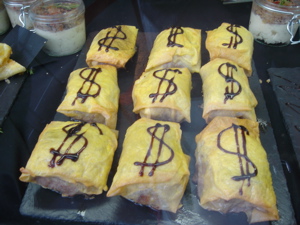 Parisgirl’s dining preferences have changed along with the current exchange rate between the Euro and the dollar. Now, more than ever, I know how eager visitors are to find restaurants, cafes, pubs or delis where you can dine well and still have enough Euros left over for the rest of your visit. Sure, many of us would love to eat at Michelin-star restaurants, but you don’t have to break the bank to enjoy a good meal in Paris. Likewise, if you’re vegetarian, or you don’t care for fussy or trendy restaurants with waiters in starched collars, you’ll love some of the neighborhood bistrots. Show up more than once and you’re likely to be remembered and get a handshake from the owner.

Here are some of my favorites at the moment. They range in style and menus from somewhat formal to very casual, from traditional French fare to traditional hamburgers.

Giufeli, my #1 choice for recent favorites has temporarily closed while it looks for a new location with more ample seating. Hopefully, by the fall season it will be up and running (and retain its reasonable prices)

Giufeli has two seatings per night and a set menu. When a chef knows what he’s doing, I’m perfectly happy to eat whatever he decides to place in front of me. At 28 Euros for the set menu, I don’t think you can find a better deal in town. Your job is to choose a wine judiciously because here’s where you might go overboard simply from the euphoria of being in such a ‘bonne ambiance’. We only ate there once before they closed and I’m eager to return as soon as their new location is posted on their website.

This neighborhood restaurant is discreetly tucked away on a side street running parallel to Avenue du Maine. La Panetière is a good example of a neighborhood restaurant where you can expect to find fresh products, prepared with flare at a reasonable price. For 25 Euros (at my last visit) we ordered a three-course menu for dinner. (Hint: One of the specialties is ‘foie gras’ for fans of this incredibly rich duck liver) 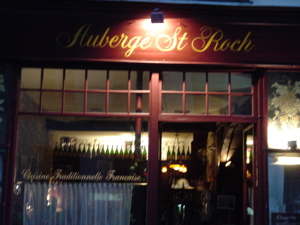 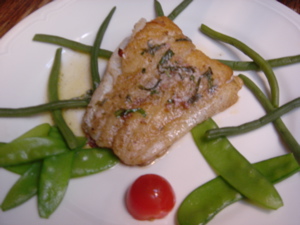 Quite simply, the fish is fresh. The chef knows just how long to cook fish – and that’s not a given in many Parisian restaurants which will charge you a much higher tab. The ambiance is rustic and the fact that L’Auberge is planted in one of Paris’s most stylish neighborhoods makes a pause in this welcoming bistro especially pleasant. No fuss, no stress.

Le Deci
51 Rue des Cinq Diamants
Buttes aux Cailles neighborhood
Tel. 01 45 80 61 38
Metro: Corvisart
Open for dinner Monday to Saturday. Open for lunch on Thursdays and Fridays. You can try a 33 Euro set menu which includes an appetizer, main course and dessert. (Granted, 33 Euros may be too pricey for an informal lunch, but I’m listing this is a reasonably-priced ‘splurge’ dinner for a romantic ‘dinner for two’ with good wine and real Parisian neighborhood ambiance).
Le Deci (short for ‘deciliter’ of wine) not only has good straightforward cuisine (you can download thier daily menu from their website)– but there’s good wine to accompany your duck magret and mashed potatoes. You can rest assured that the wines served here won’t be ‘run of the mill’. All the wines come from independent wine producers. The welcome is sincere and one wants to come back. An added delight of the Le Deci is its location on Rue des Cinq Diamants in Paris’s less well-known 13eme arrondissement (if you’re staying at the OOPS hostel, you’re not far from Rue des Cinq Diamants). Some people refer to this neighborhood as the ‘vieux Paris’ or Paris, the way it used to be
>More on Le Deci 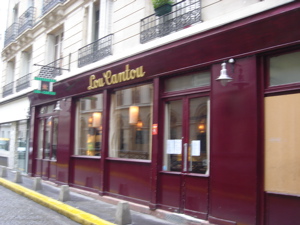 Lou Cantou
35, Cité Antin
75009 Paris, France
+33 1 48 74 75 15
This maybe considered by locals their habitual ‘cantine’ but the floating islands dessert (for this visitor) was a treat totally out of the ordinary. I’d love to make this my everyday ‘cantine’ even if I have to hop on a Metro to get there. Make no mistake. The food is basic. You can order a ‘boudin noir’ and sauteed potatoes (blood sausage) and you won’t be disappointed – but don’t be expecting the Ritz for 13 Euros.

How can you not love a bistro where you pop in around 10 pm and the kitchen is still open for you? The Plan B, located at the ‘far end’ of Rue Daguerre (which is really the near end for us because we live close to the Metro: Gaîté) is just enough removed from the pedestrian walkway section of Daguère to retain its neighborly friendliness. This is just the place to go for a huge dinner salad if you’re not into having a full three or four-course meal. Which is why its name ‘Le Plan B’ is perfect for Parisgirl.

La Table d’Orphée
5 rue Bazeilles
Metro: Censier-Daubertin 5eme
Rue Mouffetarde district
Catering Deli (Eat-in or Take Away)
Your budget may be tight, but that’s no reason you should skimp on quality. I considered myself very lucky to chance upon La Table d’Orphée located at the very tip of the Rue Mouffetarde neighborhood (at the bottom of the hill rather than the more pricey Place de le Contréscarpe). With just a few tables outside the tiny catering shop, you can while a way the early evening hours with a pleasant wine served in proper stemware and ‘grignote’ or snack on goodies portrayed in the deli’s windows. 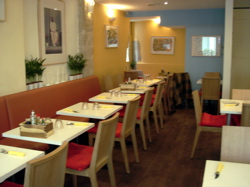 La Victoire Suprême du Coeur (Supreme Victory of the Heart)
27-31 Rue Tibourg
Metro: Hotel de Ville 75004
Tel. 01 40 41 95 03
Open Mon-Fri Noon to 3 pm Evenings: 6:30 pm to 10:30 pm
Saturdays Noon to 11 pm non-stop service
Sundays brunch: Noon to 4 pm. Tea from 4 to 6:30 pm. Dinner 6:30 to 10:30 pm.
Vegetarian cuisine at its best. Somehow they’ve pulled it all together at the Supreme Victory – ambiance, wholesomeness and flavor. Vegetarian restaurants always run the risk of trying too hard – or not trying hard enough. This is one experiment that has succeeded. We’ve only eaten here once – and I hope to get back again –soon. La Victoire Suprême is open for Sunday brunches.

Yeah, it’s a British pub. So, why am I including a British pub on this list? One reason is because Le Bombardier is open on Sundays, and secondly because I know some travelers (especially if you’ve been traveling for months) crave a connection with home – and what could be more homey than a roast beef Sunday meal? Not only that, the food happens to be quite good! 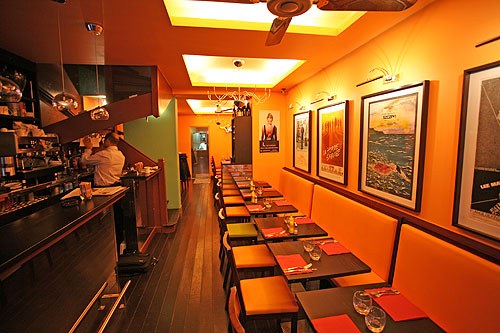 ‘PDG’ in French means ‘CEO’, ‘top guy’ etc. but this PDG is quite simply the best hamburger joint in town. The reason why I’m including PDG in this list is because suddenly hamburgers are hot in Paris. Okay, so you don’t believe me, that’s okay. We discovered PDG – simply by accident – trying to get away from the Champs Elysees overpriced cafes. (Hey, they have to pay for the address). Luckily for us, we arrived at PDG just before noon so we caught a table before the lunch crowd piled in. This place fills up quickly with those who work in the neighborhood – they come for the welcoming French patron – who also happens to speak perfect English (after a stint in NYC). Now all the super foodies are jumping on the hamburger wagon but PDG has been doing burgers very well, thank you very much for a long time. The only thing I must warn you – the hamburger prices here are comparable to NYC prices i.e. 15 Euros for a jumbo burger. On the other hand, you can have a luncheon daily special for between 12 and 15 Euros which falls quite within the norm for a reasonably priced Paris lunch.

Tom’s list. If you like Parislogue’s choice of restaurants, I think you’ll like Tom’s list too. Maybe it’s because he comes from Rochester, but I tend to agree with him that an awful lot of travel stories feature a few ‘inexpensive discoveries’ and then fall back on the ‘same old, same old’ i.e. the restaurants that are already well-known. Remember that new restaurants are popping up all the time in every Paris neighborhood.

‘Coup de coeur’: One of my favorite French restaurant websites is www.restoaparis. com. Every once in a while they feature a ‘Coup de coeur’ or a ‘restaurant that touches the heart’. Although I haven’t yet had a chance to try out ‘Le Coin des Amis’, just at the foot of Montmartre, the prices look like they fall right into the range of my favorite budget restaurants. Finding a good, inexpensive restaurant in the Montmartre district is one of the greatest challenges. If you get there before I do, please send along an e-mail to share your impressions with Parislogue readers.