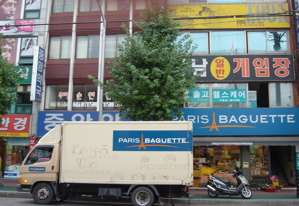 No matter how far one gets from Paris, one is never too far from a baguette and the Eiffel Tower – so we discovered in our circuitous return to France.

We’re told that Paris Baguette is a familiar sight in many South Korean cities – and although we didn’t stop in to compare the Korean baguette to a Parisian baguette, we’ve discovered that the appreciation for the delights of dining is alive and well in Korea.

Vive la gourmandise! France has a different cheese for every day of the year. Korea has over 160 different varieties of kimchi (We have about 152 more to taste). Kimchi is fermented cabbage, a staple of Korean meals. 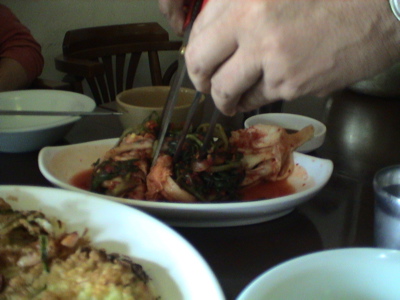 If you’re in Paris and longing for a good Korean barbecue – you don’t have far to go. Just head over to Montparnasse to the Korean Barbecue, 22 Rue Delambre, Metro: Vavin.
If you’ve never never tried Korean cuisine, this is a good place to start. It’s reasonably priced and has a loyal following of Parisian regulars.

If this inspires you to experience more of Korean cuisine – you’ll have to make the trip to get the full picture – yet as you can see, the Eiffel Tower is never to far away.