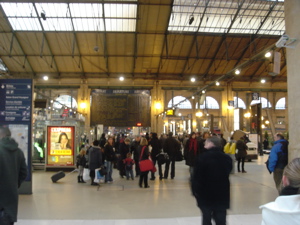 The ‘less than inspired’ interior of Gare du Nord
Parislogue readers know that I have nothing but high praise for the SNCF train system. You can take trains anywhere in France, and normally trains depart and arrive on schedule. 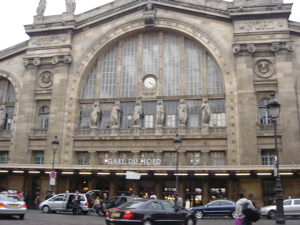 However, Paris train stations are another matter. The city screams for at least one stylish train station which captures the nostalgia for the elegant era of train travel combined with the modern accoutrements of international travel (i.e. free Wi-fi access for example). Right now, the best example of a beautifully renovated station is Musee d’Orsay. Too bad you can’t catch a train there. Mitterand had the right idea, builidng an Opera House for the ‘people’ at Bastille – but why didn’t he just apply all that tax money to the train stations which ‘the people’ use every day?
Paris has seven train stations:
Gare St. Lazare (the oldest, built in 1837)
108 Rue St. Lazare
Trains for Normandy (Deauville, Trouville, Caen, and Dieppe)
Gare du Nord
Place Napoleon III 10th arrond
Eurostar (direct to St. Pancras station, London UK), Belgium, Holland, Northern Germany (Berlin), Scandinavia
Gare de l’Est
Place du Mai 1945 10th arrond
Metro: Gare de l’Est
Eastern France (Strasbourg), Germany, Switzerland and Austria
Gare d’Austerlitz
Place Valhubert 13th arrond
Western France, Portugal and Spain
Gare de Lyon
20 Blvd. Diderot 12th arrond
Southern France, Alps, Switzerland, Italy, Greece
Gare Montparnasse
Place Raoul Dautry 15th arrond
Brittany, TVG Atlantique (Bordeaux) with connections to Spain
Metro: Montparnasse
Gare Bercy
48 bis Blvd. de Bercy 12th arrond.
Overnight train from Italy, and car transport
Metro: Bercy
You can read up about the history of each station at Paris Pages, but it’s about time Paris train stations get up off their laurels and tidy up their act. I couldn’t figure out why Gare St. Lazare remains in its lamentable ‘excuse us while we renovate’ state of disarray until a friend explained the problem in one word: Privatisation.
With the new European Union laws regarding monopolisation, railway stations will be privatized while SNCF continues to handle train service. Apparently no one is going to put any serious money into upgrading train stations until the bridge between public and private sector has been crossed and dotted.
Meanwhile, visitors will be in for a shock, especially those coming in from London via the spiffy new St. Pancras station to the lackluster Gare du Nord slam-dunked into the grittiest, bleakest corner of Paris’s 10th arrondissement. (Irony or ironies, the Europe’s longest champagne bar should be found in London and not in Paris!)
If you have trouble finding your way around the Gare du Nord, you’re not alone. Even Parisians who’ve used the train station for years admit that the maze is beyond comprehension. As to finding hotels near Gare du Nord Apart from one or two acceptable hotel chains (Timotel and Mercure) in the vicinity, you’re best off booking a hotel closer to Opera, the Grand Boulevards, or if you need to stay in the 10th arrondissement, try the Canal St. Martin area.
Gare de Lyon is saved by its famous ‘ Le Train Bleu‘ restaurant, where you can go back to the time where train stations were really the ‘happening place’ in Paris. You can almost expect Cole Porter to come strolling through the arches singing about Paris in the springtime.
Gare St. Lazare has the good fortune to be graced with the nearby landmark Hotel Concorde-St. Lazare (formerly the Grand Hotel Terminus).
Gare Montparnasse also has Concorde-Montparnasse Hotel bringing up one of its flanks at 40, Rue Commandant Mouchotte. Unlike the St. Lazare branch, Concorde Montparnasse (opened in 2004) is very ‘Zen’ in design and completely modern. The prices tend to be in keeping with Left Bank hotels in the area. Directly across the street from the Concorde at Montparnasse, you’ll find the Hotel Meridien (which used to be a Sheraton Hotel back in the 1970s). The Meridien is going through a makeover, so you’ll want to wait to book a room until AFTER the hammering is finished (as of this writing, the construction is still in progress March 2008).
Quite honestly, I’m embarrassed for the City of Paris. When you consider that Minsk in Belarus has a train station that was newly completed in 2004, you have to wonder why a city such as Paris (whose mayor wants to encourage public transportation) should allow the train stations to become venues for riots rather than up-to-date transportation hubs.
Antwerp just finished a huge renovation of its train station at the beginning of the millennium.
Meanwhile, Paris’s two most recent stations, Montparnasse (1969) and the less well known Bercy station are anything but inspiring. Just getting to the Bercy station from the Metro is baffling. And if you can’t climb steps – good luck! That goes the same for Gare St. Lazare (if you’re coming from the Metro).