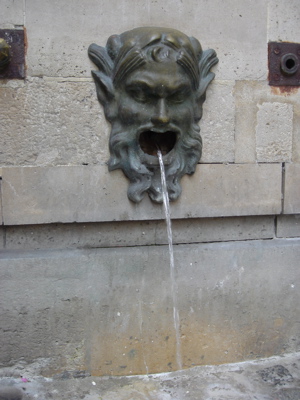 You don’t have to go to a single museum when you’re in Paris. The street is your museum. Walk in Paris’s old neighborhoods like the Marais on Paris’s Right Bank, Metro: St. Paul or the Ile de la Cite and Ile St. Louis in the middle of the Seine River and you are bound to stumble upon some sculptured figures known as ‘mascarons’ such as this fellow in the Marais.

This history of whether mascaron’s actually represented real people is often cause for discussion – guides will tell you all sorts of stories about the mascarons that decorate the Seine bridges – certainly the sculptors must have had real living people in mind (I’d be willing to guess some mascarons are caricatures of the patrons for whom they worked).

According to the French Wiki description le mascaron was primarily used to ward off evil spirits, and after the Hausmanian period (19th cent) and Belle Epoque, the use of mascarons in Parisian architecture all but disappeared (no more evil spirits) or are the mascarons on location doing such a good job already that the need has diminished?