Paris Plage: A Beach in the Heart of the City 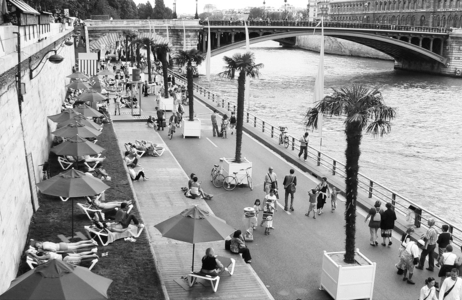 It’s pretty well-known that August is vacation month in Paris – as well as through much of Europe. August in Paris is when any residents who can afford it head out of the stifling heat of the city and make a beeline for the beach.

The key phrase there is “residents who can afford it” – despite the popular notion that the entire country shuts down in August and everyone takes a beach holiday, that’s just not the case. Sure, a huge percentage of Parisians aren’t working in August and will be sunning themselves on some sandy beach, but the French capital doesn’t become a ghost town in August. So what does the city of Paris do for the people who can’t get out of town in August? They bring the beach to Paris.

What do you need for a beach? You need water, and you need sand. Paris has the water thing taken care of with that big river that runs through the middle of it, so all they need to bring in is the sand. Thanks to truckloads of the stuff, the Right Bank of the Seine is transformed each summer into a sandy beach, complete with palm trees and big beach umbrellas. 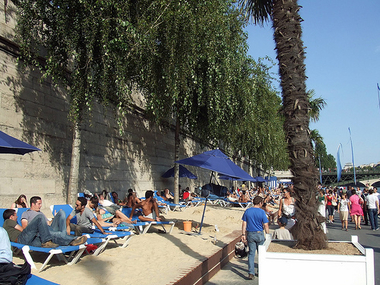 This temporary beach is called Paris Plage, or Paris beach, and it began in 2002 when the city’s mayor decided that everyone should get a beach holiday – even if they couldn’t leave Paris. It proved so popular that it was brought back the following year, and it’s been a huge hit ever since. In 2007, the Paris Plage beaches reportedly had more than 4 million visitors throughout the month.

Paris Plage opens up in late July each year, usually around July 20, and runs for four weeks through late August. Some roads on the Right Bank are blocked off, and in addition to simply lying on the imported sand and working on their tans, you’ll find people enjoying beach activities like water sports and beach volleyball as well as free concerts. And if you think you’ll miss out on going swimming because you don’t want to dive into the Seine (it’s against the rules anyway), there are usually temporary pools brought in for swimming.

Typically, there are several “locations” of beaches, each with its own theme, set of activities, and places to eat. The best part is that access to the Paris Plage beaches is totally free – including, in many cases, the “rental” of lounge chairs and beach umbrellas. It’s worth mentioning that while topless sunbathing is basically a given on most beaches in France, at Paris Plage it’s not permitted.

Paris Plage hours are typically 8am until midnight, and the locations for the three different beaches are: 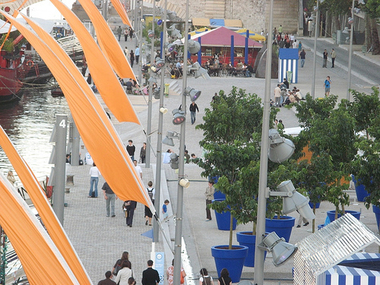 If you’ll be in Paris in late July through late August, be sure to pack your swimsuit and join the locals down at the riverside for a little beach relaxation right in the heart of the big city.