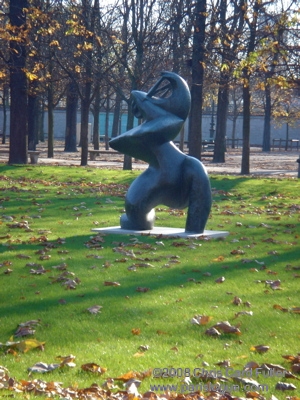 On a perfectly sunny day in Paris, you may be loathe to spend hours rambling through stuffy museum corridors, but you don’t have to stay indoors to enjoy Paris’s art treasures. The idea of using gardens as a backdrop for unusual sculpture is nothing new. Louis XIV made sure that his royal grounds at Versailles had the requisite number of statuary – and in the event that a commissioned work was less than he hoped for, he could always relegate said statue to a distant corner of the garden, far from his usual promenade.

You don’t have to go as far out to Versailles to enjoy sculpture gardens with styles ranging from classic to romantic to contemporary. Here are just a few of the gardens that offer permanent as well as temporary sculpture exhibits. 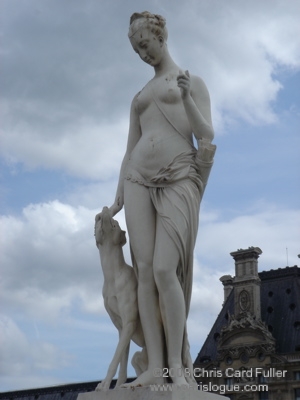 The Tuileries Gardens, located just across the street from the Louvre and Musee d’Orsay is a wonderful way to break up your museum visits – and continue to absorb art – alfresco. Whether you’re looking at the Maillol and Henry Moore nudes that emerge from geometrically trimmed hedges like mermaids floating on a mathematically calculated sea or the temporary inexplicable appearance of a monster metallic tarantula, Paris gardens are always full of surprises. 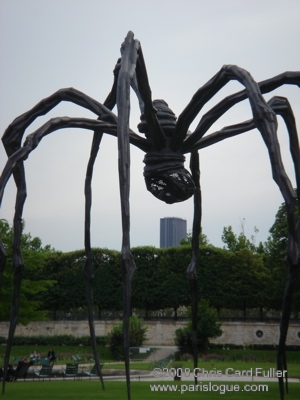 Less jolting are the classic, easy-on-the eyes, personas of Greek and Roman mythology such as Diana the Hunter who invariably ends up with her bow and arrows in many a traditional French park including the Tuileries.

Once a royal palace garden, the Tuileries are now open to the public, free of charge, from dawn till dusk.

Just like the Tuileries, the Luxembourg Gardens (Jardin du Luxembourg) has its share of permanent statuary including some of the queens and assorted heroines of French history, but in recent years, the gardens are the backdrop for some bold experiments. In 2007, those same French queens were temporarily enveloped in contemporary garb. Grey stone gave way to bright reds and a bevy of weird caging. Be prepared to be caught by surprise at every turn in Luxembourg. One year, a wire was stretched across the Medici fountain. At first it looked like a bit of restoration work until one caught glimpse of the attached skull sculpture. 21st-century Gothic meets Medici? 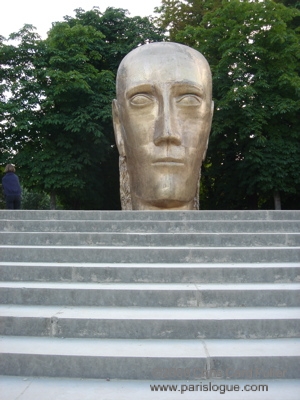 Earlier this year, a gleaming golden bust entitled ‘The Prophet’ stood sentinel to the left of the garden’s main reflecting pond. In addition to temporary sculpture, Luxembourg’s plant conservatory (the building where tropical plants are stored during the winter season) also houses eclectic exhibits (such as the cultivation of apples). You might even be so inspired that you’ll want to duck into the Musee du Luxembourg for one of their blockbuster temporary exhibits. 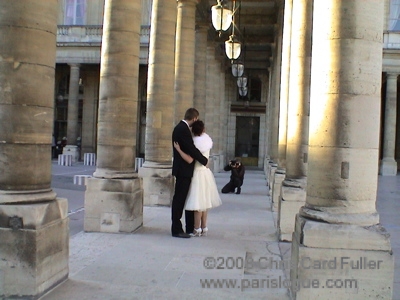 Just a hop, skip and a jump from the Tuileries, you’ll find the Palais Royal gardens tucked behind the Rue de Rivoli arcades. Once again, you’ll find here a traditional garden peppered with contemporary art including the Buren multi-level cylindrical sculptures (which have become a favorite venue for kids practicing their jumping skills). 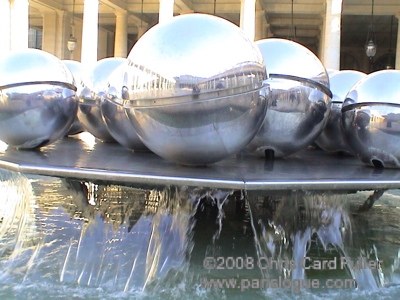 Revolutionary or revolting? Whatever your first reaction may be to the juxtaposition of traditional and contemporary, you might as well get used to it. Parisians love to shake up tradition. How appropriate to find this contrast in the gardens where the French revolution founders cooked up their plans. Although the original cafes no longer exist where the likes Diderot, Robespierre, or even a young Napoleon lingered over a chess game, the nowadays peaceful enclave embracing old and new may give you ample fruit for inspiration for your personal transformation. 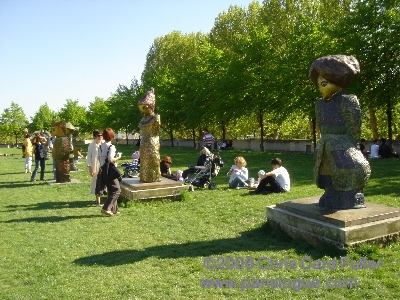 Whimsical. That’s the only way I can describe the colorful sculpture which brightens the vast expanses of Bercy Park. Walking from the Cinematheque (51 Rue Bercy), cross the park and head for the high ground. That’s where you’ll find the sculpture garden filled with characters that gaze across the field of sunbathers.

I love the perspective of this park which seems to have no clear beginning and no clear end. It just has levels – high and low. If you have a little of the ‘voyeur’ in you, you’ll take the high ground, walk the length of the promenade and gaze upon the benchwarmers relaxing under leafy trees. 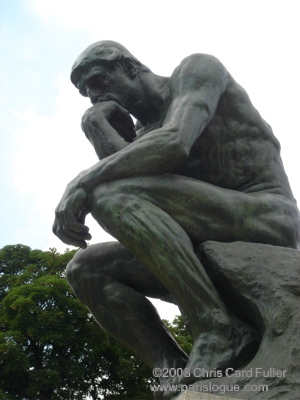 Although this is the one garden out of this line-up where you’ll have to pay an admittance fee (the entrance fee includes access to the museum and its surrounding gardens), it’s still the ideal garden for enjoying great art – and still be outdoors. How would we react to “The Thinker” if we looked at him crouched in meditation while being surrounded by stark white walls? Would we find his situation resembling that of a prisoner? Does a work of art take on a new life when it lives outside? Of course these are all the sorts of questions that he might be asking himself – or quite simply – is it time to stand up and get out of the rain? 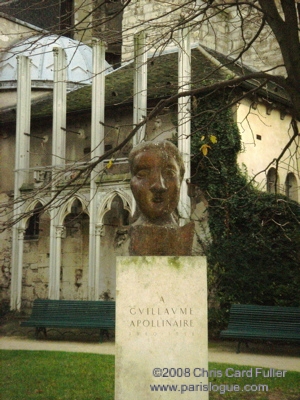 Paris has its share of tranquil squares – and you’ll usually find at least one sculpture decorating even the tiniest of squares. One thief was quite delighted to chance upon the Picasso bust of the poet Apollinaire. He quickly made off with it. Whether the current bust is the recovered original or nice facsimile doesn’t detract from the delight of finding a little bit of Picasso in a square. Where else would you expect to find a cubist after all?

Where does the garden end and the Musee du Quai Branly begin? Again, like Bercy, I like the concept of infinity – no walls – no boundaries. Architect Jean Nouvel conceived a structure that would never be completely separated from its natural environment (which he also strove to achieve at the Cartier Foundation on Blvd. Raspail). Likewise, it could be argued that the Quai Branly garden is a living sculpture which winds its way to its core treasures, the actual museum (where you’ll have to pay an admission fee to continue).

These are just a few examples of how Paris Gardens and Parks mix art with natural surroundings. In future posts, I will explore some specific Paris gardens and tell you which parks rank as Parisgirl’s favorites.