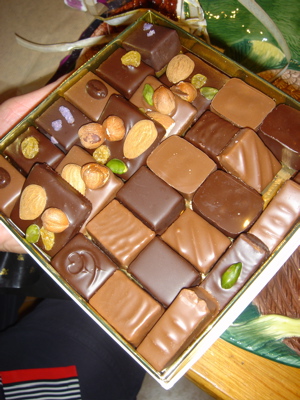 If you haven’t already booked your hotel rooms, book quickly! This year’s International Auto Show which starts in Paris in October and runs the 4th through the 9th in 2008 will cause reasonably priced hotel rooms to be snapped up. If you plan on going to the car show – a biannual event – you can even order your tickets in advance through the Paris bookstore FNAC.

One of the highlights of this year’s auto show will be its electric cars (and hopefully, the famous Blue Car) which Parislogue hopes will soon become a familiar vehicle on Paris streets as part of their much awaited Autolib short term car rental project.

>> More on the Paris Auto Show

How appropriate that this year’s Chocolate Salon straddles October and November, just in time for Halloween treats. Some of France’s smartest people loved chocolate including the writer/philosopher Voltaire who liked to sip several cups of hot chocolate during the day. So it stands to reason that Paris should be one of the top world cities for chocolate enthusiasts. Whether chocolate is your quick fix, your medicine, or your indulgence, at the chocolate fair, you’re bound to find just the recipe to assuage your sweet tooth.

Just how far does this chocolate fantasy go?

Here are just a few examples:
Chanel‘s ‘chocolate’ watch. Don’t worry. Your timepiece won’t melt – even though time does. Fashioned to resemble a bar of chocolate the design is made of firmer stuff than chocolate.

Your sweetie-pie can’t make it to Paris in time for the Salon du Chocolat? Send him or her a Chocotelegramme.

>> More on the Salon du Chocolate

Both the International Auto Show and the Salon du Chocolat will be held at the Porte de Versailles, Paris Expo Center. These are several large convention halls (Hall 5 for the Salon du Chocolat) in Paris’s southwestern sector. If you’re driving, take the Porte de Versailles exit off of Paris’s ring road. The convention center complex is visible from the ring road or the ‘peripherique’ as it’s called in French.