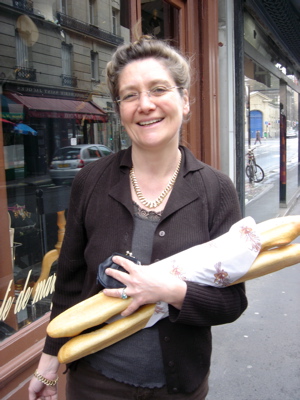 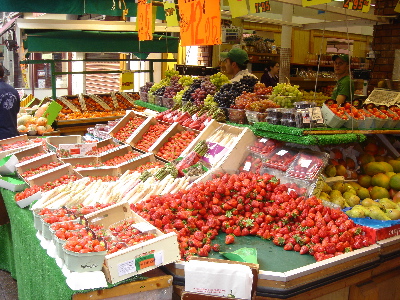 Okay, I’ll be honest. Paris markets intimidate me. Just down the street we have the Edgar Quinet Market every Wednesday and Saturday Metro: Edgar Quinet. Even though I speak French well enough, my accent labels me as a foreigner and I still have memories of agonizing encounters at a 13th arrondissement market when I was an au pair/student trying to buy a piece of fresh fruit or a box of strawberries. The fruit always seemed too expensive and the vendor would give me strawberries that hadn’t even ripened.
“The strawberries are practically white,” I’d complain.
“I’ll show you how to make strawberries turn red!” the vendor would chuckle.
These might be the kinds of encounters that account for the “Paris syndrome” which may cause other timid souls to hide themselves in their apartments for days – or go to Monoprix to do their shopping – where they can pick out their own produce, have the products weighed by an impersonal attendant (but not risk any chance of embarrassment).
Many years have gone by – and slowly – I’m venturing into the outdoor market. Finally, today I found my market angel!
What is a market angel? The market angel is the kindly woman standing in front of you who happens to be an ‘old hand’. We struck up a conversation when I – in typical tourist fashion – failed to notice that there was in fact, a line, that had neatly formed for one particular fruit and vegetable stand. When I noticed an elderly man to my right – and a woman of a certain age to my left, I finally asked, “Excuse me, are you together.”
“No, luckily for her, but yes I’m standing in line.”
And behind him there were two or three other people including my market angel, who commended me for having the wise reflection (and somewhat belated observation) not to butt in line. (BTW, no one had bothered to utter a single word of reproach) – they’re used to rude tourists.
“So you speak French,” said the women with the fancy fur collar.
“Well, you picked the right place. The reason there’s a line is because this stand has fresh produce and it’s fairly priced.”
I told her I was going to cook a gigot d’agneau – a ‘leg of lamb’.
“Ohh, you cook?”
“Well, I try, but I’m no cook. How would you prepare a gigot d’agneau?”
She proceeded to give me her recipe.
And here it is:
Flavor your lamb with garlic cloves (but be sure to take out the very centerpiece of the clove) and that will take away the pungency that gives your guests’ that bad aftertaste – and garlic breath) she explained. Baste with olive oil.
Broil your leg of lamb with a searing heat before lowering it to a 180 (325-350 F). That’s what gives the exterior o nice crispiness. Use a little aluminum foil over the top and you can put some water in the bottom of the dish to make the gravy from the drippings.
So, while I’ve been waiting in line, I ‘ve learned how to cook a leg of lamb.
“I will introduce you to the owner,” she said. When it was her turn, she said, “Here is an American who comes here regularly.”
The owner and I shake hands, and now finally, I have found a place to do my outdoor market shopping – and never feel intimidated or worried about being overcharged, or humiliated.
I hope you too can find a market angel.
About the photo:
The woman in this photo is not the ‘market angel’ but just as sweet. She’s just returning from the Port Royal market Port Royal & Rue St. Jacques RER Stop: Port Royal. She held out her plastic bag and said to me, “As you can see, I didn’t come back with much!” But she does have plenty of bread.
The cost of groceries has recently risen to such a degree that it had a big impact on municipal elections this past Sunday. “Le pouvoir d’achat” or ‘buying power’ is a major concern. For tourists, this means higher prices at restaurants too!.
Guide to Paris Outdoor Markets