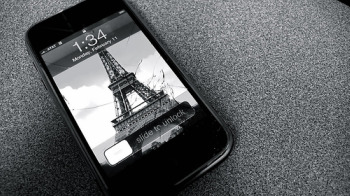 With the proliferation of internet cafes in even some of the most remote places in the world and things like the iPhone making it possible for people to take the internet with them wherever they go, it’s no surprise that travelers are finding all kinds of uses for using mobile technology.
The iPhone in particular has introduced new tools to the average traveler’s toolkit, since for some people the iPhone can replace bulky guidebooks and hard-to-fold maps – even if you’re not using the phone part of the iPhone when you’re traveling. In this article, we’re going to look at some of the best iPhone apps for Paris travel that are currently available, broken down into three categories – travel guides, language assistance, and fun.
There are new apps popping up every day, and thousands upon thousands already available, so if your favorite Paris iPhone app isn’t listed here, please let us know in the comments.

If you’re not fluent in French before you board the plane for your Paris trip, then these apps will either help you cram some French study in on the flight or give you those key phrases and words you’ll need right when you need them.
CoolGorilla’s Talking French Phrasebook
$0.99
If you have no intention of learning French for your trip, then CoolGorilla’s Talking French Phrasebook app is a good one to consider. There are more than 500 useful words and phrases for travelers, with both text and audio (for those of you who don’t even want to try to say things out loud).
French to English Phrasebook
$2.99
A bit of a step up from the “talking phrasebook” is this French to English Phrasebook app, which will still give you all the tools you’ll need to make yourself understood in Paris.
MemoryLifter English/French Basic Vocabulary
$14.99
To take it further, the flash card apps from MemoryLifter will help you get some French study in before your trip, on your flight, or whenever you’ve got some down time. The more comprehensive MemoryLifter English/French Basic Vocabulary has so many levels that you’ll be able to use it for years without outgrowing it, and there are several subject-specific categories you can download separately if you like. One that might be handy is the MemoryLifter English/French Traveling & Nature ($6.99) for all the travel-related vocabulary included.

Some of these apps can easily fit into the “travel guide” category, because they’re useful when you’re actually in Paris – but we wanted to highlight them separately because they’re either so interesting or unique that we didn’t want them to get lost in a more general list of maps and audio guides.
Escargo
$1.99
Does the idea of ordering something scary without knowing it freak you the hell out? Then you need the Escargo app. There are more than 1,800 French food terms and translations in this app, so you won’t order snails if you don’t intend to.
Sweet Paris
$0.99
Another great Paris food-related app is Sweet Paris, which is a city map with more than 100 listings of chocolate shops, pastry shops, and other sweet shops in Paris. You can get each shop’s specialties, open hours, and photos totally offline; if you want directions from where you are then you’ll need WiFi or a cell/data connection.
Keys to the Fleas
$1.99
For the shopping enthusiast who wants a pocket-sized guide to Paris flea markets, look no further than the Keys to the Fleas app. It was produced by the woman behind The Paris Apartment, and it’s the only thing you need to shop the Paris flea markets like a pro.
Musee du Louvre
FREE
While you can definitely use the Musee du Louvre app while you’re visiting the actual museum, it’s probably best to use it to prep for a visit. The app has a selection of the museum’s famous artworks (with the ability to zoom in, which is cool), details about the piece and the artist, and the location in the museum itself.
Soundwalk Paris
$5.99 each
A fun way to get into a trip to Paris before you get there is with these mini-movies from Soundwalk Paris. They’re one hour long, and they’re sort of like audio tours of Paris neighborhoods, although the tour is following the storyline of each movie. You can enjoy them before your trip or on the flight, and then use the geo-location option (GPS required) to turn them into guided walking tours of the neighborhood when you’re in Paris. The neighborhoods available are The Marais, Belleville, St. Germain des Pres, and Pigalle.
ArounderTouch
FREE
The ArounderTouch app isn’t Paris-specific (it includes several different cities around the world), but within the Paris section it’s cool enough that it’s worth listing here. The app includes visitor information about top sights in Paris and has the added benefit of several 360-degree photos of each attraction as well. It’s a fun way to see what you’ll see before you get there.
Real SnowGlobe Paris
$0.99
Who doesn’t want a little iPhone kitsch? No need to buy a tacky Eiffel Tower snow globe when you’ve got one on your iPhone. Nevermind that the “snow” in the Real SnowGlobe Paris app is little stars and not snow at all.
Paris Concentration
FREE
You know the concentration game, where you match pairs of cards by remembering where certain cards are placed face-down on the board? With the Paris Concentration app each pair of cards you match up and remove reveals more of a Paris photo in the background.
Paris Fireworks
$0.99
There are typically fireworks set off behind the Eiffel Tower at New Year’s, but if you can’t be in Paris at New Year’s then download the Paris Fireworks app and set off fireworks behind the famous monument whenever you like with just a tap of your finger.
>> Want to read more about iPhone apps for Paris? My Melange lists her favorites, and there are even more at this iPhone blog.
photo by bredgur