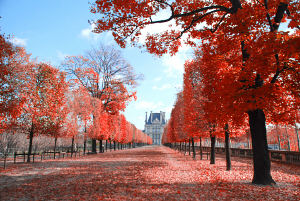 While many people focus on summertime travel when they’re planning their vacations in Paris, it can be tough to find cheap flights to Paris in the summer. So for budget travelers, people just looking to avoid the tourist onslaught of the high season, or anyone who prefers to experience the city when it’s more genuinely itself, there’s always Paris in October. The good news is that you’ll find the prices on most travel-related things are lower than in the summer, and if you’re lucky you’ll still get some decent weather.

Now, as you’ll no doubt realize, there’s never a time in Paris when all the tourists have gone home. It’s a year-round tourist destination, so you can expect to see tour groups being led around by colorful flags at pretty much any time of year. But the crowds at major tourist stops like the Louvre and Eiffel Tower will be significantly less if you’re planning a visit to Paris in October than if you’re one of the many visiting in July. And of course, the lower prices are usually a hit with travelers, too.

The weather in Paris during October is, as you’d expect, going to be a little cooler than in the summer or even early fall. The average high temperature in October in Paris is around 59F (15C), and the average low is 46F (8C), so it’s clearly not balmy weather we’re talking about here. But despite those chilly temperatures, the average rainfall in October is one of the lowest of the year – less than 70mm all month long. So while you may need to snuggle up to your sweetie during that stroll along the Seine, you won’t necessarily have to bring along an umbrella. See? It’s all about the silver lining. (Although really, you’ll probably want to bring along a small umbrella. Just in case.)

Some of the events you can check out which happen in October in Paris are: