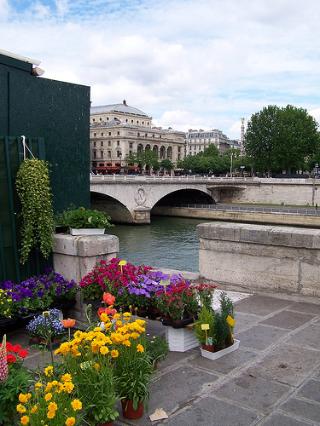 Anyone who has visited Paris in May has probably wondered why on earth the song is about April, when May is clearly the nicer month in this beautiful city? There’s no accounting for song lyrics (something about poetic license), but maybe the song about April will lure more people into visiting then as opposed to May, when you really want to go. The bottom line is that you should forget whatever you’ve heard about April. May in Paris is what it’s all about.

Weather in May in Paris
Paris is starting to bloom in April, and the weather in Paris really can be lovely then – but it’s also one of the wettest months of the year in the city, so an umbrella is a must and frequent (not to mention sudden) showers are more than likely. In May, you’re going to have a more favorable ratio of sunny days to rainy days, and you might even luck out with a few days of sun in a row. (You also might not.) The temperature in May usually ranges from around 50-65F (10-18C), which is usually quite pleasant – even for an evening stroll with your sweetie after a romantic dinner. Of course, you may still want a light jacket if you’re planning a cruise on the Seine.

Events in Paris in May
There’s no other way to put this – May in Paris is absolutely bursting with holidays. These are not, however, the kind of holidays that most visitors to the city will know about or even be taking part in, although they can throw a monkey wrench in your travel plans. Keep an eye on your calendar, and you’ll be prepared for anything.

May 1 is commonly called May Day, but in Europe it’s known as Labor Day or Worker’s Day. It’s one of the few holidays that shuts down pretty much everything in Paris, including banks, government offices, many museums and other attractions. If May 1 falls near a weekend, it’s also a great excuse for Parisians to head out of town for a long weekend, so the city may feel pretty deserted. Pay special attention to what might be left open on May 1 if you’ll be in Paris then – including restaurants – to avoid any unwelcome “closed” signs. As an aside, leading up to May 1 you’ll probably see flower stalls selling lily of the valley – it’s traditionally given to friends on May 1 for good luck.

As if to make up for the fact that museums may be closed on May 1, May is also the month when the annual Museum Night happens. This is the night each year when museums all over Paris (not to mention all over France and many other parts of Europe) throw open their doors for free (that’s right, no admission) and stay open until well after midnight. The exact date changes every year, but it’s usually around mid-May – and because everything is free, you can expect the crowds to be bigger than they normally are. Still, it’s a fun way to spend an evening, and it’s a great way to save a little money.

The two fairs that started in April continue into May, so you can check out both the Foire de Paris and the Foire du Trône (the former for the wine and cheese tastings and design showcases, the latter for the carnival rides and cotton candy).

Labor Day isn’t the only public holiday in France in May – May 8, which is known as Victory Day, is also a public holiday. It marks the end of the second World War, and you’ll find people throughout the country leaving flowers on the graves of World War II soldiers. You may also find that some places you wanted to visit are closed on May 8 – so check with your hotel to find out what might be closed on that day so you can plan your trip around the closures.

Sports fans will want to make note of the dates for the French Open, which takes place at Roland Garros in Paris every year in May. Tickets can be understandably expensive and hard to come by, but if you plan ahead you can make this world famous tennis tournament a part of your Paris trip. Remember that tennis fans the from all corners will be converging on the city during the French Open, which means that the prices on hotels in Paris will go up – if you can find a room at all! You’d be smart to book early if you’ll be in Paris during the tournament, whether you intend to go see it or not.