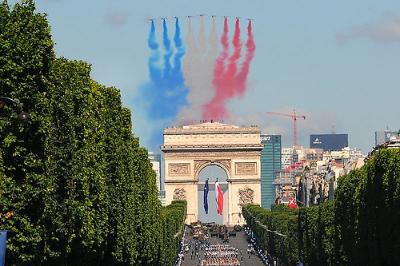 Paris in July is one of the busiest times of year in this always-busy city. In addition to the major influx of tourists that descend on Paris in the height of summer, July also sees two of the biggest events that hit the city every single year. This is also a time of year when you’ll find the prices on everything from plane tickets to hotel rooms to souvenirs has gone up, sometimes dramatically. Still, despite the crowds and the high prices, July in Paris isn’t all bad. In fact, it can be a really exciting time to visit the City of Lights.

Weather in Paris in July
While July in some parts of the world (and indeed, in some parts of France) can be overly warm, July in Paris doesn’t usually suffer from oppressive heat. In fact, the average temperature in July is a perfectly pleasant 75F (24C). But if you’ve been following the weather news the last few years, you’ll know that there have been some unseasonably high temperatures throughout Europe in recent summers. For Paris, that means that there are the occasional days where the mercury climbs well into the 90s (F), especially later in the month. Although this remains the exception to the rule, if you’re at all concerned about hot weather you should make sure your Paris hotel has air conditioning available.

Perhaps to offset the sometimes-hot weather (or perhaps just as a crazy coincidence), July is also one of the rainiest months in Paris. The rain isn’t necessarily predictable or reliable, however, nor does it restrict itself to a light refreshing shower. No, the July rains can be heavy and bring thunder and lightning with them – so either pack a little travel umbrella in your day-bag or plan to do a lot of ducking in and out of cafes and shops. The Paris weather doesn’t always make it easy to pack, but it could give you an excuse to pick up a new scarf or a pair of sunglasses. How chic!

What’s Going On in Paris in July
As mentioned, July is one of the busiest months for big-time events in the French capital. One of the annual happenings is Bastille Day on July 14th, which is actually celebrated all over the country (it is, after all, the French national holiday), but Bastille Day in Paris is something to behold. The festivities usually begin the night before on July 13th with dances and concerts, but the main events are the military parade down the Champs-Élysées and the fireworks show at the Eiffel Tower on the 14th.

The other big event in July in Paris is the final stage of the Tour de France, which has traditionally been held along the Champs-Élysées since 1975 (the actual date varies every year). As an aside, this final stage of the world-famous bike race and the military parade on Bastille Day are two of the only three times a year when the grand boulevard is closed to traffic – and two of those events are in July. I told you July in Paris was a big deal. Even if you’re not a cycling fan, the pomp surrounding the race’s final day is fun to see – and if you can get a seat at one of the cafes along the Champs-Elysees, that can make race-watching even more laid back and fun.

Other events which take place in July in Paris include: