Paris Hostels Near the Eiffel Tower 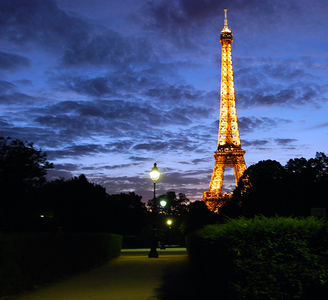 Easily the most recognizable landmark in Paris – and, for that matter, one of the most recognizable landmarks anywhere on earth – is the Eiffel Tower. It’s visible enough from many parts of the city that you can use it for navigation, but when you’re in Paris what could be better than having a hostel near the Eiffel Tower? The good news is that there are some hostels that aren’t far from the iconic tower – although you may not have a romantic tower view from your window.

There are only a couple of genuine hostels around the Eiffel Tower, but the area does have some reasonably priced budget hotels. So if you’ve got a little money to splurge on a 1-star or 2-star hotel in this area, or you’re looking for a step up from the usual hostel dorm room, those are a good option. But even if you’ve scored a cheap air ticket to Paris, you might still be looking to save the most money possible – in that case, stick with the hostels.

Below, you’ll find a map of Paris with the Eiffel Tower marked by a red star. The hostels near the Eiffel Tower are also on the map, marked with green squares. And since there aren’t a ton of hostels around the Eiffel Tower, I threw in a couple budget hotels as well – they’re the blue squares. You can get more information about each hotel or hostel by clicking on the icon on the map, or by scrolling down underneath the map to read the brief description of each place.

>> For more suggested hotels in the area, here’s an article about budget hotels near the Eiffel Tower.

Hostels Near the Eiffel Tower

Hostels Near the Eiffel Tower

Aloha Hostel
1 rue Borromee – 75015 Paris
Although I said the chances of finding a hostel room with a view of the Eiffel Tower are slim, the Aloha Hostel – which is actually in the neighboring 15th arrondissement and not the 7th where the tower itself is – says that some of its rooms actually do have tower views. Whether or not you can see the tower from your room, however, you can be content in knowing that it’s a reasonably short walk away.

The Aloha Hostel has both private and dorm-style rooms, and breakfast and WiFi access are both available for free. There is both a curfew (2am) and a midday lockout period for cleaning (11am-5pm), but as long as those don’t cramp your style the prices are excellent.
>> Book Aloha Hostel in Paris

The 3 Ducks Hostel
6 place Etienne Pernet – 75015 Paris
More than just a hostel, 3 Ducks Hostel is as much a bar and party spot as it is a place to sleep. In fact, it’s one of the best party hostels in Paris, and that’s largely due to its fabulous on-site bar. But aside from that, it also happens to be in the 15th arrondissement, pretty close to the Eiffel Tower.

The 3 Ducks Hostel isn’t the cleanest or most comfortable hostel in Paris, but if you’re looking for a party vibe you’ll be pleased. Be aware that linens and towels aren’t included in the price, so you’ll either be bringing your own or renting them. WiFi is available, but it’ll also cost you. A small breakfast is offered for free. There’s no curfew or lockout period, either.
>> Book The 3 Ducks Hostel in Paris

Budget Hotels Near the Eiffel Tower

Timhotel Tour Eiffel
11 rue Juge – 75015 Paris
Of all the properties on this list, the Timhotel Tour Eiffel is the closest in proximity to the Eiffel Tower. It’s in the 15th arrondissement, but it’s just a short walk from the tower and an even shorter walk to the Seine River. This is part of the Timhotel chain, so it’s definitely lacking in boutique hotel charms – but it’s also lacking in boutique hotel prices, too.

The Timhotel Tour Eiffel has 40 rooms, and all of them have private en-suite bathrooms and A/C, and some have satellite TV. Internet and WiFi access is available throughout the hotel, in the rooms and the common areas, but it’s only free in some of the rooms. Breakfast is also avialable, but that’ll cost extra.
>> Book Timhotel Tour Eiffel Hotel in Paris

Hotel Mon Reve
76 avenue Felix Faure – 75015 Paris
If you look at the map above, you’ll see that the Hotel Mon Reve is the property on this list furthest from the Eiffel Tower. It’s in the 15th arrondissement, and it has 40 rooms – all of which have been renovated, like the rest of the hotel.

Each room at the Hotel Mon Reve has a private en-suite bathroom (some with bath, some with shower), satellite TV, and internet access. Breakfast is available for an extra fee, but you can dine in the hotel’s breakfast room or in your own room for the same price.
>> Book Hotel Mon Reve in Paris

Ideal Hotel
96 avenue Emile Zola – 75015 Paris
The Ideal Hotel is on the busy Avenue Emile Zola, which cuts right through the middle of the 15th arrondissement. It’s a 2-star hotel that’s about a 10-minute walk from the Seine and still within a reasonable walk of the Eiffel Tower. There’s also a Metro stop nearby for easy access to the rest of the city.

There are 35 rooms at the Ideal Hotel, each of which has a private en-suite bathroom (some showers, some bathtubs), sound-proofing in the walls and windows, and satellite TV. Internet and WiFi access is available in the lobby of the hotel, and breakfast is available for an additional fee. If you’ve got a student ID, however, check whether they’re offering a special – you may be able to get something like one free breakfast, depending on what’s being offered when you stay.
>> Book Ideal Hotel in Paris