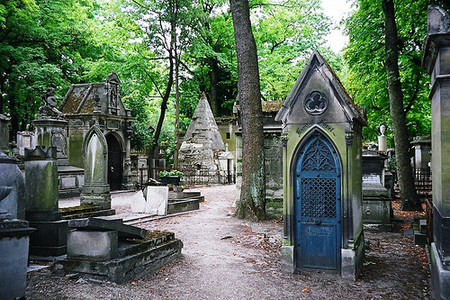 Paris isn’t just a place where people dream about living, it’s also a popular place to go once you’re dead. Anyone who doubts this needs only to look at the list of all the famous people buried in Paris – it’s extensive. One of the most famous cemeteries in Paris is Pere Lachaise, home to the graves of such illustrious artists as Seurat and Delacroix, writers like Gertrude Stein and Oscar Wilde, and musicians like Edith Piaf, Chopin, and Doors frontman Jim Morrison. It’s decent company, especially if you know you’re going to have the same neighbors for a good long time.

Pere Lachaise is, in many ways, like a small city within Paris – and it’s tough to see everything in one visit. If you’re interested in going to the cemetery several times, you might want to locate your bed nearby. Toward that end, here are the Paris hostels near Pere Lachaise Cemetery.

You’ll find a map below with both the cemetery and the hostels marked on it, so you can see exactly where each one is in relation to the cemetery (as well as other points in Paris). To get more information about each hostel, you can either click on the icon on the map or scroll down further to read a brief description about each one.

Blue Planet Hostel
5 Rue Hector Malot – 75012 Paris
While Pere Lachaise Cemetery might be high on your to-do list, and you might want to stroll through its haunting lanes more than once, you probably have other things you want to do and see in Paris, too. So booking a room at the well-placed Blue Planet Hostel is a great idea. It’s not terribly far from the cemetery via the Metro, but it’s also really close to major Paris landmarks like Notre Dame and the Louvre Museum.

Blue Planet Hostel offers a free breakfast to guests, which is a great perk for a hostel, but they don’t include linens or towels in the price of the bed. With many hostels not offering free towels you may already be traveling with one of your own (or be used to renting them), but be prepared to also rent linens at this place.
>> Book Blue Planet Hostel in Paris

Absolute Paris Hostel
1 rue de la Fontaine au Roi – 75011 Paris
Another hostel in Paris that’s not right next door to Pere Lachaise but within the ballpark (do they have ballparks in Paris?) is Absolute Paris Hostel. It’s in the 11th arrondissement and also isn’t far from the picturesque and popular Montmartre area. Within a five-minute walk of the hostel’s front door you’ll find the Republique Metro station, which will get you to Pere Lachaise quickly (and just about anywhere else in Paris you want to go).

Hotel Belfort
22 Rue de Belfort – 75011 Paris
For sheer proximity to Pere Lachaise, you can’t do much better – on a budget – than the Hotel Belfort. It’s a few streets from one of the cemetery’s entrances, and almost exactly between four separate Metro stations (two of which serve the cemetery). So it’s a great location from which to make several visits to the cemetery, and it’s also easy to get around the city.

As you’d expect, linens and towels at the Hotel Belfort are included in the price of the room, and all the rooms have en suite bathrooms. The only differences between the bathrooms is that some rooms have showers, others have baths.
>> Book Hotel Belfort in Paris

Hotel Garden
1 Rue de General Blaise – 75011 Paris
The Hotel Garden in Paris is another hotel very close to Pere Lachaise and also seemingly surrounded by Metro stations, so you certainly don’t need to feel like the cemetery is the only thing at your disposal. This is a 2-star hotel with 42 rooms available, all of which have private bathrooms.

Towels and linens are free with the room, and luggage storage is also free. A continental breakfast is served each morning in the Hotel Garden, but it’s not free. WiFi is also available, and that is free, but the signal only reaches to the reception area.
>> Book Hotel Garden in Paris

Hotel Armstrong
36 Rue de la Croix Saint Simon – 75020 Paris
As any budget traveler knows, budget hotels often stand in for hostels when there aren’t any (or many) hostels in an area. Such is the case with Hotel Armstrong. It also happens to be a short walk from the Pere Lachaise Cemetery, so that’s a bonus for anyone who wants to have these famous graves available at a moment’s notice. There are a couple Metro stations nearby as well, so getting to other sights in Paris (there are other sights in Paris?) is easy.

Because this is a hotel and not a hostel, linens and towels are included for free. Breakfast is available at the Hotel Armstrong, too, but it’s not free. All rooms have modem plugs for internet access, but for faster internet there’s an internet cafe open 24/7 in the hotel.
>> Book Hotel Armstrong in Paris

Hotel Boissiere
53 rue Jean Jaures, Levallois Perret – 92300 Paris
Sometimes when a budget hotel isn’t located right around the corner from a major tourist attraction it ends up being really cheap, when it might be more expensive in another location in the city. The Hotel Boissiere in Paris is one of those hotels. It’s located just outside the ring road which circles the main part of Paris, so it’s a little cheaper than a similar hotel would be in the city center, and there’s a Metro station a few minutes’ walk from the front door.

There are 46 rooms at the Hotel Boissiere (5 of them have private terraces) and linens, towels, and WiFi are all available for free. Breakfast is offered in the breakfast room, but if you want it you’ll have to pay a daily fee for it. The hotel’s proximity to the ring road makes it easy to get in and out of the city by car, and some parking is available at the hotel (for a fee).
>> Book Hotel Boissiere in Paris