Paris Hostels in The Marais 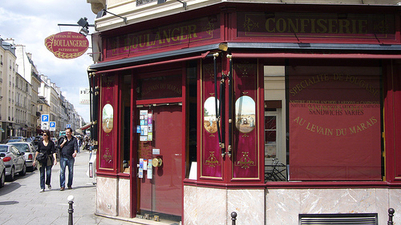 Budget travelers in Paris who don’t want to stay in a Montmartre hostel and don’t have the budget for a high-end hotel aren’t exactly swimming in accommodation options. Yes, there are hostels scattered throughout Paris, but they tend to cluster together like so many sheep, and finding outlyers can be difficult – especially if you’re focused on one of the popular neighborhoods in Paris that’s better known for its boutique hotels than hostels.

One of those neighborhoods that’s awash with hotels but seriously lacking in hostels is The Marais – it’s charming and picturesque, and possibly everything you want for your Paris surroundings, but it ain’t cheap. There are a few hostels in The Marais which are difficult to get information about if you’re not actually in the building chatting with them, as they’re either not online or not available through the usual booking services. So in this post, I’m including one hostel that’s close to The Marais, and several budget hotels that are closer to the center of this chic neigborhood.

There’s a Marais map below with the Place des Vosges (that lovely square at the heart of this area) marked, as well as the hostel and hotels I’ve listed. The hostel is in green, the hotels are in blue, and you can read more about each one below the map or click on the icons on the map for more information, too.

>> And if you’re looking for more hotel options, here’s a post about budget hotels in The Marais.

Hostels in The Marais

Blue Planet Hostel
5 rue Hector Malot – 75012 Paris
The Blue Planet Hostel is actually in the 12th arrondissement, right next to The Marais. The hostel itself also happens to be right next to the giant Paris train station, Gare de Lyon, not to mention a short walk across the Seine from another big station, Gare d’Austerlitz. In other words, getting in and out of Paris if this is your homebase is extraordinarily easy.

There are double rooms and dorms, but all the rooms have bunk beds – even the doubles. Breakfast is included for free, but linens and towels aren’t – so bring your own or rent them at the hostel. Some of the rooms have en-suite bathrooms, but most still use the shared facilities.

WiFi and internet access are available for free in the lobby, although neither extend into the hotel’s 40 rooms. Not all rooms are non-smoking, so be sure to ask for one if that’s important to you. And note that breakfast isn’t included in the price.

Hotel Mondia
22 rue du Grand Prieure – 75011 Paris
The Hotel Mondia isn’t far from the Hotel Voltaire Republique north of The Marais and a stone’s throw from the Place de la Republique. There are also several nearby Metro stations that make getting around the city quick and easy.

The 2-star hotel has 23 rooms, all of which have en-suite bathrooms (some with a bathtub, some with a shower). Internet access is available at the hotel, and breakfast is served for a small additional fee.
>> Book Hotel Mondia in Paris

Hotel Saint Sebastien
42 rue Saint Sebastien – 75011 Paris
The Hotel Saint Sebastien is in the 11th arrondissement, sort of northeast of the heart of The Marais, and is close to both Metro and bus stops. The hotel has doubles, triples, or quads available, so if you’ve got a few friends you can treat a quad like a small hostel dorm room – only you’re paying for the whole thing regardless of how many beds you use.

All the rooms in the hotel have en-suite bathrooms (some with a shower, some with a tub), and the hotel also has an on-site restaurant. Breakfast is available at the restaurant, but not included in the price of the room.

Hotel Garden
1 rue de General Blaise – 75011 Paris
We’re moving a bit further from The Marais, with the Hotel Garden, but like I said – bargains are hard to find in this area. This is another hotel in the 11th arrondissement, and it’s a 2-star hotel with 42 rooms. All of the rooms in the hotel have an en-suite bathroom with a shower.

The hotel is, as the name would suggest, located in front of a pretty park, and yet it’s still close to a couple of Metro stops to get you anywhere in the big city. WiFi is available for free in the lobby, and a continental breakfast is available for a small additional fee.
>> Book Hotel Garden in Paris

photo at the top by Ted Drake