Paris Hostels in the Latin Quarter 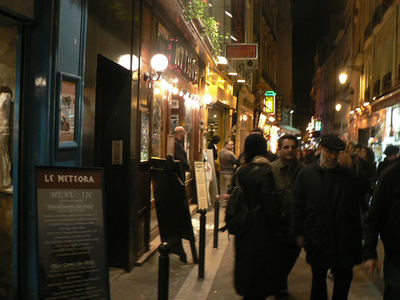 The Latin Quarter in Paris may be famously student-centric and the former haunt of starving artists and writers, but the modern-day Latin Quarter is decidedly more high-rent that that. So while this part of Paris has a bohemian past, the vast majority of the accommodation options in this neighborhood are hotels – not hostels.

Having said that, there is one hostel in Paris’ Latin Quarter, one that’s on the border of a neighboring arrondissement, and a couple of bargain-priced budget hotels in the Latin Quarter which may suit you. The hotels are great if you’re looking for something that’s not super fancy but still a step up from a hostel, or if you’re a hostel-goer who’s got a bit of extra money to splurge on a spot based more on location.

Below, you’ll find a map of the Latin Quarter with the Pantheon (which is smack in the middle of the neighborhood) and the hostels and hotels marked on it. For more information about each hostel and hotel, you can click on the icon on the map or scroll down for a brief description underneath the map.

Hostels in the Latin Quarter

Young & Happy Hostel
80 rue Mouffetard – 75005 Paris
Budget travelers looking for the best cheap beds in the Latin Quarter need look no further then the only hostel that’s actually in this popular neighborhood – the Young & Happy Hostel. It’s on one of the most famous boulevards in the Latin Quarter, in fact, so you only have to walk out the front door to start soaking up the atmosphere.

The Young & Happy Hostel has no curfew, which is brilliant for late night dancing, but your disco nap might be cut short by the midday lockout the hostel has so they can clean the rooms. The beds are cheap, and you do get breakfast included in the price, but you’ll either need to bring your own towel & sleep-sack or rent them because neither is provided for free. Internet access is available, but also for a fee.
>> Book Young & Happy Hostel in Paris

Oops Hostel
50 Avenue des Gobelins – 75013 Paris
The Oops Hostel is technically located in the 13th arrondissement, but it’s right on the border of the Latin Quarter so it’s still pretty easy to call this a Latin Quarter hostel. In fact, the fabulous Rue Mouffetard is only a five minute walk from the hostel’s front door.

The interior decor at Oops Hostel is modern and light, as the hostel only opened in 2007. There are both private and dorm-style rooms available – and even the dorm rooms have bathrooms en suite. Some of the perks of the hostel are that linens, breakfast, WiFi, and internet access are all free with the price of the bed, although you’ll need to rent or bring your own towel if you’re in one of the dorms. There’s no curfew at Oops, but there is a midday lockout for cleaning.
>> Book Oops Hostel in Paris

FIAP Jean Monnet
30 rue Cabanis – 75014 Paris
While the FIAP Jean Monnet can hardly be called a “hostel in the Latin Quarter,” since there are so few I thought I’d throw it into the mix. It’s actually a 15-20 minute walk from the heart of the Latin Quarter in the neighboring 14th arrondissement. It’s an enormous space, with 200 rooms that can sleep nearly 500 people.

You’ll have options ranging from single rooms (with en-suite bathrooms) to dorm-style rooms with 6 beds each (also with en-suite bathrooms). There’s no age restriction, there’s a half-board option (which means you get breakfast plus an evening meal included), and there’s even a French language school on the premises. Internet & WiFi access is available, too.
>> Book FIAP Jean Monnet hostel in Paris

Hotel Maxim Quartier Latin
28 rue Censier – 75005 Paris
Unlike many of the quintessentially charming boutique hotels in Paris’ popular neighborhoods, the Hotel Maxim Quartier Latin offers more modern (though not opulent) decor at bargain prices – especially for a hotel, and especially for the Latin Quarter. It’s on the outskirts of the Latin Quarter, but definitely walking distance from the center.

Hotel Des Trois Colleges
16 rue Cujas – 75005 Paris
Right in the heart of the Latin Quarter, Hotel Des Trois Colleges is going to cost more than a hostel – but it’s still quite a steal for this part of Paris. This is largely due to it being a 2-star hotel instead of a 3-star or 4-star, but for regular hostel-goers it may very well seem like the Ritz.

The Des Trois Colleges Hotel has 44 rooms, and they all have private en-suite bathrooms, A/C, WiFi & internet access. And talk about a room with a view – if you’re lucky enough to score one of the rooms on the top floors of the hotel, they overlook the Pantheon itself.
>> Book Hotel Des Trois Colleges in Paris