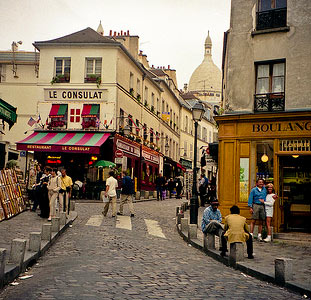 In just about every city there are certain parts of town where you’ll find lots of hostels and budget hotels clustered together, as if for safety. Many times, these tend to be areas of the city where you wouldn’t ordinarily want to spend oodles of time – around the main train station, for instance. But in Paris, one of the places where you’ll find budget accommodation is in a neighborhood that I happen to find endlessly charming (and which contains perhaps my favorite spot in all of Paris) – Montmartre.

Many of the accommodation options in and around Montmartre are super budget hotels, but there are a few hostels (or almost-hostels) in the area as well. Here, then, are a few of the hostels in Montmartre.

You’ll find a Paris map below that’s focused on the Montmartre neighborhood, and that has all the hostels on this list marked – so you can see just where they are. To get more information about each hostel, click on the hostel icon on the map or read the brief descriptions you’ll find underneath the map.

Hostels in Montmartre in Paris 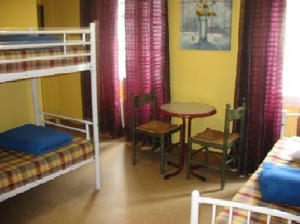 Located at the base of Montmartre, not far from Sacre Coeur, is Le Village Hostel. They offer dorm rooms and private rooms, and there’s a cafe, a common room as well as a guest kitchen. Every room has its own bathroom and its own telephone, and because the hostel occupies a 19th century building you get atmospheric touches like exposed original wooden beams.

The hostel’s cafe is open until 2AM, and there’s a terrace which boasts a lovely view of the Sacre Coeur Basilica. Breakfast is included for free, but bed linens and towels are not – you’ll need to bring your own if you don’t want to pay extra. There’s no curfew at the hostel, and the reception area is staffed 24 hours a day. Internet access is available in the common room.

Prices for a dorm bed range between €26-32, depending on the season.
>> Book Le Village Hostel in Paris 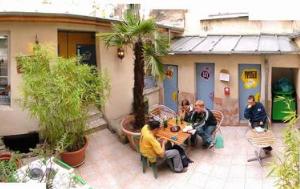 Because the Montmartre area is considered one of the budget traveler parts of Paris, it shouldn’t be surprising that Woodstock Hostel also makes the list as one of the best party hostels in Paris. But of all the party hotspots, this is the most laid back.

There’s a hostel bar that’s open until 2AM, but there’s also a 2AM curfew and a midday lockout period for cleaning. So most of the truly party animals will probably be staying elsewhere. It’s just down the street from the Perfect Hotel & Hostel (listed below), and both WiFi and breakfast are available for free. Bed linens and towels, however, will cost extra.

During the low season, a dorm room bed goes for €19, while in the high season you’ll pay around €22. Past guests have noted that some of the rooms are on the small side, and the hostel kitchen is poorly equipped. Most agree that the location is fantastic, however.
>> Book Woodstock Hostel in Paris 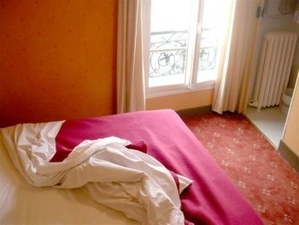 The hostel is located not far from Sacre Coeur, and it’s close to the Lamarck Metro station. Past guests have raved about the breakfast, which is included with the dorm beds (they’re considered “bed & breakfast” rates) but if you’re staying in a private room you’ll have to pay extra for the breakfast. Also note that there’s a 2AM curfew. 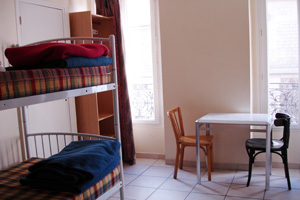 Like Caulaincourt Square, Le Montclair Hostel is also a combination hotel/hostel, with some dorm beds and some private rooms. This hostel is on “the back of Montmartre hill,” meaning it’s even a bit further from the city center – but there are both Metro and bus stops a block from the hostel’s front door.

There is no curfew and no lockout at this hostel, and breakfast and bed linens are available for free. You will pay extra for a towel, however, if you don’t bring one yourself. Internet access is available in the lobby.

Some guests have noted that your experience at the hostel may depend on the room you get – there’s no elevator, and hauling a heavy bag to the 6th floor might not be fun. (Just another reason to pack light.) Dorm beds will cost around €28.
>> Book Le Montclair Montmartre Hostel in Paris 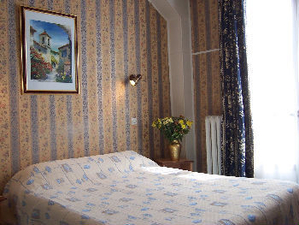 With a name like Perfect Hotel & Hostel, it has to be good, right? This hostel is just on the outskirts of the Montmartre neighborhood, with the beautiful Sacre Coeur five minutes away at the top of the nearby hill.

One downside that some people note is that there isn’t a Metro station right outside the door – the hostel is situated almost exactly between the Anvers and Cadet stations, so you’ll have access to two different stations. You’ll just have to walk more than a block to get to them. Alternately, bus lines 85, 67, 74, and 30 stop just outside the hostel.

As the name suggests, this isn’t a typical hostel. In fact, the name is a bit misleading, as although there are rooms which range in size from singles to triples, and the prices are per person, you don’t get to reserve one bed in a multi-bed room. If you’re booking a bed, you’re booking – and paying for – that whole room. Still, the prices are really good for Paris, and towels, bed linens, and breakfast are included in the price. So if you’re traveling with a few friends, it’s still a good deal.

original photo at the top by abbyladybug