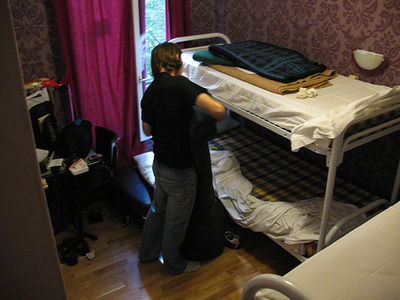 You might think that a city like Paris, being so popular with travelers of all stripes for centuries, would be an easy place to find a hostel. But a cursory glance at any website dedicated to hostels in Paris (including the hostels page on this very site) will tell you that it’s not actually as easy as you might expect. Not only are there pages and pages of listings to go through, the places calling themselves “hostels” on many of these sites aren’t hostels at all but really budget hotels. There’s nothing wrong with budget hotels, but if you’re looking for a hostel bed you want to be able to separate those out.

To help you find the hostels in Paris without having to sort through hundreds of search results, we’ve put together a series of articles that focus on certain kinds of hostels or hostels that are close to certain Paris landmarks. This means you can narrow your search dramatically right from the get-go, and also that you’ll only be looking at hostels that fit specific criteria. On each of the articles, you’ll also find helpful maps that lay out where the hostels listed are located in the city, so you can determine whether the hostel’s own description of being “walking distance” from the Eiffel Tower is accurate.

Now, since some of these landmarks don’t have more than one or two hostels nearby (and sometimes not even that many), some of these lists of hostels do include a few budget hotels, usually in the 1-2 star range. In every case where there’s a budget hotel included on a list, however, it’ll be described as a hotel so you know right away.

With each of the articles listed below, you can get more information about the Paris hostels listed by either clicking on the hostel icons on the featured map or by reading the brief descriptions which are underneath every one of the maps. And don’t miss our overview of what to look for in Paris hostels so you know what to expect before you arrive.

We’re going to keep adding to this list of hostels articles, so if you don’t see the search criteria you were hoping to find be sure to drop us a note and suggest additional articles we could put up on this page. We aim to please!

>> Looking for more travel planning tips for your upcoming trip? Look no further than our Paris guide for first-time visitors.

photo at top by comcinco