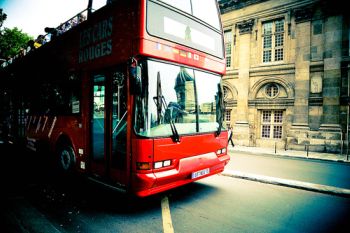 Sometimes when you first arrive in a new city, it helps to get an overview of it from the comfort of a tour bus. I know what you’re thinking – a tour bus? Really? That sounds so unlike something an independent traveler would do, doesn’t it? I’m not suggesting you sign up for a big bus tour of Paris, the kind that keeps you from experiencing this glorious city. Rather, I’m suggesting that using one of the many hop-on hop-off tours in Paris can help you get your bearings in a quick and efficient way so that you can continue exploring the city on your own terms afterward.
The hop-on hop-off Paris tours are in open-top double-decker buses, and obviously it’s much nicer if you can get a seat on the top level (unless the weather’s bad, of course!). The views are unobstructed, which makes for better photo-ops, but even more than that it’s easier to see where you are in the city if you can look around 360-degrees – which gives you more of a chance to get your bearings in the city.
Most of the hop-on hop-off bus tours in Paris have pre-recorded guided tour information in several lanugages, so you’ll be able to follow along in whatever language you speak and know what you’re looking at. It’s not a bad idea to have a Paris map with you so you can see where you are in relation to everything else, too.
Perhaps the best thing about a Paris hop-on hop-off city tour is right in the name – the ability to get on and off as you like at any of the stops along the bus’ route. This gives you the opportunity to get off the bus to visit museums or attractions along the way, then get back on the bus to tour more of the city before stopping at another sight you’d like to see. Some of the tours even offer tickets that are good for two days, so you can tour part of the city on one day and finish the tour on the next – all on the same ticket.
>> Browse and book Paris hop-on hop-off tours
If you’ve got a good Paris guidebook with you or you’re traveling with someone who knows the city relatively well, you can do a Paris tour on the cheap by using the normal Paris buses. Check out the bus maps to figure out which ones cover the ground you’d like to “tour,” and then snag a window seat. For the price of one public transportation ticket you’ll have a mini Paris tour, DIY-style.
photo by tibchris