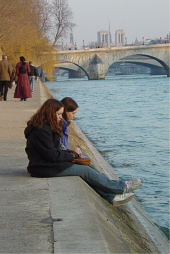 How many times have you arrived in a new city, guidebook in hand and all pre-trip research done, and yet you’ve still felt kind of lost and out of place? It’s almost inevitable, and while that exact thing happens to the most savvy travelers among us, it can also seriously put a dent into your holiday. After all, when you’ve only got a limited amount of time to see a place, you don’t want to spend a good portion of it feeling lost.

Well, you no longer need to feel lost and out of place in Paris. Because in Paris, you have Paris Greeters.

I know what you’re thinking. At least I know what I was thinking when I first read about the Paris Greeters. “You mean like at Wal-Mart?” I thought. “The people in the blue vests who hand you a shopping cart?” I had visions of people in red, white, & blue vests (and berets, of course) meeting newcomers at the airports and train stations, handing out croissants or baguettes with a smile and a hearty, “Bonjour!” But as it turns out, the Paris Greeter program is not only nothing like Wal-Mart’s (thank goodness), it’s one of the coolest things I’ve heard about in awhile.

The Paris Greeters are a group of people who know and love the city of Paris, and who volunteer to meet up with visitors and help show them around and get used to the city. The official name of the organization, “Parisien d’un jour, Parisien toujours,” or “Parisian for a day, Parisian forever,” reflects the overall goal – once you fall in love with a city like Paris, you’ve started a lifelong love affair.

There are around 100 volunteer Greeters at the moment, ranging in age from 30 to 70 and speaking 10 different languages between them. The volunteers do what they do out of a love for Paris and because they enjoy meeting travelers, and not only is there no fee for this service – that’s right, it’s completely free – the Greeters themselves won’t accept money. You can make donations to the program if you like, and some people have brought personal gifts for their Greeter from their home country, but you can forget about the standard tour guide tip for these folks.

Now, you won’t get tours of Paris’ famous monuments and sights out of a meeting with a Paris Greeter. They (rightly) figure you can do those things on your own. They figure their job is to show you a little of the Paris you wouldn’t otherwise see.

You can read all about the Paris Greeters program on their website, and in this interview with the president of the group. I just wish programs like this existed everywhere.