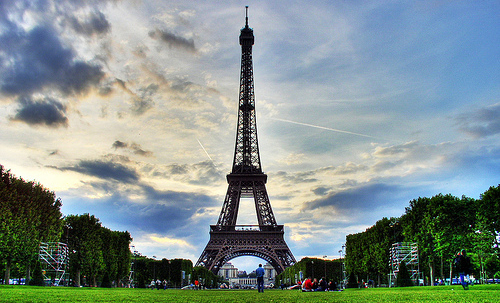 Anyone traveling to Paris is going to have to think about many of the same things before arriving – how long to visit, where to stay, what to do, how to get around, etc. And for someone who’s seeing Paris for the first time, there are bound to be even more questions about those subjects. So in this article, you’ll find links to the resources which will help you plan your Paris trip – whether it’s your first time or not, although many of these things are probably going to be most useful to first-time visitors to Paris.

Here’s a short time-lapse film to give you a peek at many different parts of the city in fast-forward!

Paris >> from Deti on Vimeo.

Before You Leave Home

Paris is a big city, so it pays to be looking at a city map when you’re planning your visit. But beyond that, the city is divided into districts called “arrondissements,” the numbers of which don’t always correspond exactly to the boundaries of the various neighborhoods in Paris. For many reasons when you’re planning a trip, it’s just a good idea to get to know the city’s layout.
>> Paris Maps
>> Neighborhoods in Paris

One of the first things you’ll notice is the Seine river that cuts through the city center. Each side of the river has a name – the Right Bank and the Left Bank. This comes into play when you’re getting around the city, and when you’re choosing where to stay, so it’s a good idea to become familiar with each “bank,” what’s there, and what you can expect there.
>> Left Bank and Right Bank of the Seine

And beyond the physical layout of the city, it helps to know some basic visitor information, too – such as the country telephone code, the time zone, and the electricity.
>> Paris Visitor Information

Packing for Paris is always going to be partly dependent on the weather and your travel style, but it never hurts to hear what someone who spends lots of time in Paris each year has to say on the subject.
>> What to Pack for Paris

Speaking of learning from someone who knows Paris well, this article is a compilation of 30 travel tips from a local perspective – they’re things you might not think about on your own, and could help make your trip even easier.
>> 30 Paris Travel Tips from a Local

One more thing you may want to do before you leave home is look into getting one of the discount cards available to tourists in Paris. There’s a Museum Pass which covers most of the city’s top attractions, a transportation pass, and one combo pass that covers both. Some you can buy in Paris once you get there, but one of them you’ll have to order from home.
>> Paris Discount Cards and Passes

For those of you who are at the earliest point in your travel planning – in that you haven’t even booked your airline tickets yet – this article has some tips for ways to find the best deals on Paris airfare.
>> Airfare to Paris

Where to Stay in Paris

You’d expect a city like Paris to have an overwhelming number of options when it comes to accommodation – and you’d be right. We’ve tried to help you focus your searches so that you don’t have to wade through hundreds of hotel and hostel listings.

If you’re more of a hostel person, you’ll be pleased to know there are lots of hostels in Paris, too. We’ve put together a really handy hostel guide with links to the various articles we’ve written about hostels in the city – including ones that are near specific attractions and in specific neighborhoods. This article will continue to be updated, but it’s an excellent guide to Paris hostels already.
>> Paris Hostel Guide

Paris is a big city, but it’s also got a top-notch public transportation system. So for any of those times when you don’t feel like taking a stroll, or when you’re visiting a place that’s too far from your hotel or hostel to walk, you can rest assured that if the Metro doesn’t get you within a few steps of where you want to go, a bus will.
>> Paris Transportation Guide
>> How to Use the Metro in Paris
>> Guide to RER Trains in Paris
>> Taking the RER B from Charles de Gaulle Airport into Paris
>> Buses in Paris

Driving in Paris isn’t really recommended – espcially for the first-time visitor, and especially if you’re not visiting any place other than Paris. But if you feel you must get behind the wheel, or you’ve got day trips or other destinations on your to-do list, then be sure you know the driving laws in France before you turn the key.
>> Renting a Car in Paris
>> Driving in France

What to See & Do in Paris

The list of things to see in Paris could stretch on for miles, so you’ll have to plan your visit well depending on how much time you have to spend in the city. Just remember – anything you can’t check off on your first visit is something to add to your next to-do list!
>> What to Do in Paris
>> Free Things to Do in Paris
>> Paris Museums
>> Taking Tours of Paris

Paris is a great city for eating, whether you’re a serious foodie or not. You don’t even have to spend a lot of money to enjoy some of the city’s best foods – just swing through a food market and pick up the makings of a fantastic picnic.
>> Where to Eat in Paris
>> Eating on the Cheap in Paris
>> Figuring Out a Daily Food Budget for Paris
>> What to Eat in Paris

Paris Weather & What to Expect Throughout the Year

The weather in Paris can impact your trip in lots of ways – from dictating how you pack to what attractions you’ll see on what days to even what time of day you plan to do certain things. The best thing you can do is consult the current weather forecast right before you’re packing your bags, but when you’re still planning your trip and trying to decide when to go, looking at what you can expect in Paris weather-wise throughout the year is a great idea.

Another thing to remember is that there are various festivals, holidays, and events that go on in Paris all year long – some of them will be things you want to be in the city for, while others might be things you want to avoid. Either way, you’ll want to know in advance what’s going on. There’s a good overview of the weather in Paris in this article, and also links to information about each individual month so you can find out what special events are going on throughout the year.
>> Paris Weather and Event Calendar

As mentioned, there are plenty of things to keep you busy during a visit to Paris – but not all of them are meant for the daylight hours. If you’re interested in the nighttime social scene in Paris, you’ll want to save some of your energy – maybe squeeze a “disco nap” into your day – so you can party with the locals until the wee hours. In fact, although the Metro stops running for a few hours in the middle of the night, if you plan your time well you can dance the night away and catch a train home when they start running again first thing in the morning. Now, that’s a night well spent.
>> Where to go clubbing in Paris
>> General tips about Paris nightlife

No matter what kind of shopper you are – whether you’re looking for the latest fashions from that up-and-coming boutique, looking to spruce up your wardrobe with a chic department store find, or just hoping to pick up a few souvenirs to remember your vacation – there’s something for everyone in Paris. Shopping in Paris runs the gamut from outdoor markets to giant department stores, so if you’re planning to spend some money you’d do well to check out your options before you leave home. This is especially true if you’re a bargain-hunter, as there are only a couple times a year when everything in Paris is on sale.
>> Shopping in Paris
>> Guide to Sale Seasons in Paris
>> Where to Find the Best Markets in France
>> Market Shopping Tips

Yes, there are a zillion things to see and do in Paris, and you could spend a lifetime there without covering it all. But even if you’re only visiting for a few days you may want to explore some of the fantastic day-trip destinations that are available from Paris. Many of the best places to visit in a day from Paris are easily accessible via public transportation, making them even better day-trip spots. In this article, you’ll find suggestions and information about several of the best Paris day trips, as well as details about how to get to each one.
>> Day Trips from Paris

Getting from Paris to Other Places in France & Beyond

photo at top by Al Ianni (Away)