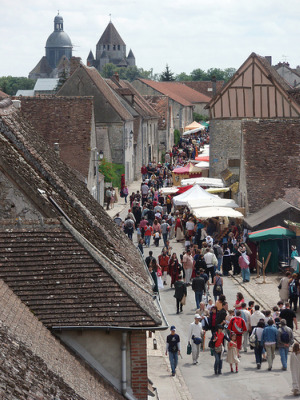 You know what a good qualification for a day-trip destination from Paris is? When that destination is a UNESCO World Heritage site. Even if you’re not one of those people who’s “collecting” UNESCO sites as you travel, it still tells you something about the place that UNESCO thinks its worthy of being on the list. Such is the case with the town of Provins, which is a great day-trip from Paris.

The name of the UNESCO site is Provins, Town of Medieval Fairs – which should give you some indication of why the town is worth visiting. The town was host to one of the so-called “Champagne fairs” which took place regularly throughout the year in the 12th and 13th centuries in the regions of Champagne and Brie. These were trading fairs, which may sound quaint today, but back then they were vital to the country’s economy – and, indeed, the economic development of Europe.

Much of the town itself was built to host the fairs, so even though the fairs are no longer going on, there are still medieval sights – including well-preserved city walls and a tower.

What to Do in Provins

The medieval fortifications in Provins, built when the town was experiencing its heydey in the 12th and 13th centuries as the location for one of the top trading fairs in the area, are in remarkably good condition today and are the highlight of a trip to Provins.

The medieval tower, called Caesar’s Tower, is the high point of a visit to Provins – literally and figuratively – in that it towers above the historic town center and, once you climb it, gives you a commanding view of the town and the surrounding countryside as well. It was built in the 12th century and has been used as a watchtower, bell tower, and even a prison.

The city walls, dating from the 13th century, are another historic highlight of a Provins visit. A visit to the Tithe Barn (once a covered market) will give you an idea of what life was like during the Middle Ages, as it’s something of a museum dedicated to Provins in the “Champagne fairs” era. There is a Provins Museum in a 12th century house in the town, which will give you a sense of the town’s and region’s history from long before those trading fairs put Provins on the map.

In addition to all these above-ground historic sights, Provins is also notable for its network of underground tunnels and rooms. These underground spaces were used for meetings of secret societies back in the day, and a guided tour can give you a really different perspective on what medieval life in Provins was like.

Provins boasts more than 50 historic “listed sites,” but even if you don’t visit all of them you can still enjoy wandering through the historic town center’s pretty lanes.

How to Get to Provins

Provins is a short 49 miles southeast of Paris, and you can get there by train or by car.

Trains for Provins leave from Gare de l’Est in Paris, and it’s about 1-1.25 hours one-way. Finding information online about timetables and fares for the journey is nigh unto impossible (if you find a place to do it, please leave it in the comments below!), but don’t be confused by French rail websites telling you no station exists in Provins. Provins does, in fact, have a train station – it’s called Gare de Provins. It’s not a big TGV-type train you’ll be taking, it’s more of a commuter-type train; look for the signs that say “trains de banlieu” – this is where you’ll buy your tickets. A one-way ticket should cost you in the neighborhood of €10.

To reach Provins from Paris by car, look for the highway in the direction of Metz/Strasbourg. Take that highway to junction number 13, and then follow the signs to Provins. According to the Via Michelin trip planning website, the trip should take you about 1.25 hours

Although finding train fare and schedule information online is a headache (or at least it was for me when I was writing this post!), the Provins tourism office’s site has some good information on it. The French version is far more helpful than the English version, so if you speak French you’re better off – but the English version has a PDF 2-page brochure that has walking tours, information about the attractions, a list of the festivals and other events going on throughout the year, and a list of hotels and restaurants as well.

Here’s the official Provins tourism website in English, and here it is in French. And here’s the PDF brochure (in English).