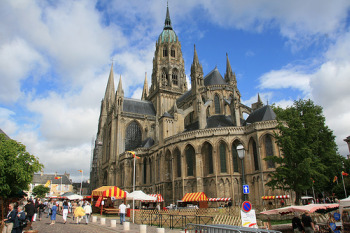 The town of Bayeux is an easy and pleasant day-trip from Paris, and can be combined with a stop at the Normandy beaches. The town is located very close to the D-Day beaches and the war memorials and cemeteries in the area, so it’s very easy to start your day with some World War II history and finish with an afternoon in Bayeux. Or, if you’d like to spend more time in Normandy, Bayeux can also make a good home-base for further exploration.

These days Bayeux is probably best-known for the Bayeux Tapestry and the town’s beautiful cathedral. In nice weather, however, it’s a perfectly lovely town to spend a day just walking through the pretty streets, perhaps taking in the botanical garden, or enjoying just watching the river roll by.

(This isn’t the kind of exciting day-trip your kids are going to talk about for years, like they might about a day-trip to Paris Disney, but if you’re sans children then it’s absolutely worth considering.)

What to Do in Bayeux 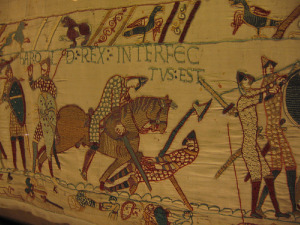 The most famous attraction in Bayeux is the Bayeux Tapestry, and it’s absolutely worth checking out even if you don’t think you’re much of an art lover or particularly interested in textiles. Why? Because it’s one of the oldest surviving textiles in the world.

Despite its name, the Bayeux Tapestry isn’t technically a tapestry – it’s a long piece of embroidered cloth. It’s only 20 inches wide but fully 230 feet long, and it’s believed it was commissioned to commemorate the Norman Conquest of England in 1066. Scholars differ on how old the so-called tapestry is, although the prevailing wisdom is that it was probably created around the same time as the Bayeux Cathedral in the late 1070s.

The tapestry originally hung in the cathedral, but today it’s the star feature of its very own museum. The “Tapisserie de Bayeux” museum is open every day and has all kinds of exhibits about the history of the tapestry and guides (audio and otherwise) to help you decipher what you’re looking at on the embroidered cloth itself.

>> Find out more about the Bayeux Tapestry Museum at its official website, including opening hours and ticket prices 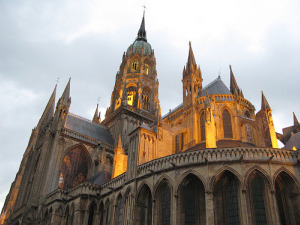 After seeing the tapestry, don’t miss a stop at its original home, the impressive Bayeux Cathedral. The cathedral was consecrated in 1077 (in the presence of William the Conquerer, no less), and although it has been updated and added to in the centuries since then there are still elements that remain from the 11th century. From the outside, it’s the lace-like spires that attract attention – and deservedly so. But inside, the grandness of the graceful columns and the light that floods in through the many clear glass windows makes it a pleasant place to spend some quiet time.

The cathedral is open to visitors every day (as long as there isn’t a service going on) and costs nothing to enter, and you can get a guided tour if you want to find out more about it or see some of the areas otherwise off-limits to tourists.

Another free attraction in Bayeux is the botanical garden, or Jardin Botanique de Bayeux. It covers 2.6 hectares and has been open to the public since the mid-1860s. One of the most impressive trees in the park is a “weeping beech” tree that has been listed as a national monument since 1932. The garden is open year-round, although there are different open hours depending on the season.

>> Learn more about the Bayeux botanical garden at its official website

You don’t have to leave Bayeux to get a little World War II history into your visit, either If you can’t make it out to the D-Day beaches or to any of the cemeteries outside of town, be sure to ponder the cost of war at the biggest British war cemetery in Normandy right in Bayeux itself. Bayeux was the first town liberated in Normandy in 1944, and the town continues to celebrate liberty through enlightenment with an award they give each year to reporters who do particularly notable work in bringing facts to light under difficult (sometimes life-threatening) circumstances.

>> Read more about the Reporters’ Memorial in Bayeux

And when you’re winding down your day in Bayeux, don’t forget to sample some of the local apple-based beverages the region is famous for. That’s right, this is Calvados country. If it’s too early for true Calvados, most places have local apple cider as well.

How to Get to Bayeux 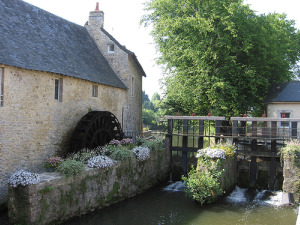 Bayeux is approximately a 2.5-3 hour drive from Paris, and the closest large city is Caen. If you’d rather not drive a rental car in Paris – and especially if you’re leaving Paris for other parts of France and starting your journey in Normandy – then it’s definitely advisable to take a train to Caen and pick up your rental car at the train station there. It’s a short 17 miles from Caen to Bayeux.

It’s easy to take the train from Paris to Bayeux if you prefer. Trains leave from St Lazare station, and it’s the trains that have a terminus in Cherbourg that stop in Bayeux. If you get a direct train from Paris to Bayeux you’ll make the journey in 2 hours (if not, it could take 2.5 hours and typically requires a change in Caen). I’m not able to find current ticket prices for this trip, but a few recent posts I found have a one-way trip at around €30-35 in 2nd class, so if you’ve got a RailPass this might be a decent use of one day (assuming you’re doing the round-trip in one day).

Where to Stay in Bayeux 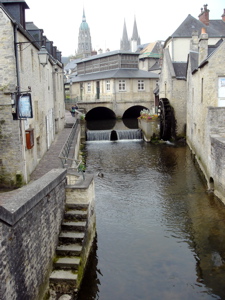 As mentioned, there isn’t so much to do in Bayeux that you couldn’t do it easily in a day-trip from Paris (and you can even combine it easily with a stop at the Normandy D-Day Beaches), but if you’d like to use Bayeux as a home-base from which to explore more of Normandy, then you’ll be happy to know there are several accommodation options in this small town.

There’s an HI Hostel in Bayeux, the only hostel in town, called “Family Home Hostel.” Of course there are many hotels in Bayeux and the surrounding area as well, and depending on when you visit you might get a good deal on a hotel room because it’s a slower season. Many of the accommodation options in Bayeux, however, are more in the B&B or “Chambres d’Hotes” category. Some are fancier (and more expensive) than others, so check around before you book a spot that seems beyond your price range.

The visitor website for Bayeux also covers the D-Day beaches and the Bessin area, so it’s especially handy if you’re making more of a general tour of the area; but it’s also full of information if you’re just visiting Bayeux. Navigating the pages dedicated to attractions can be a little confusing, but if you use the search box you should be able to find what you’re looking for without having to go looking for it.

photos, top to bottom, by: roblisameehan, elyob, ho visto nina volare, elyob, Chris Card Fuller ©2007 (and may not be used without permission)