How to Use the Paris Bus System 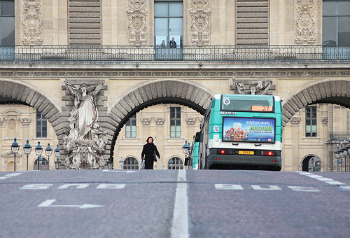 When the Paris Metro is such a handy way to get around the city center, it’s not surprising that so many people don’t even notice buses in Paris let alone ever bother to take one. But there are a few reasons why learning about Paris buses can be a good idea for your trip.
For starters, although there are Metro stations conveniently located all over the city center, the further you get from the heart of the city the more spread out they get – and depending on where your hotel or hostel is located you might find that there’s a bus stop that’s closer to where you’re sleeping than the nearest Metro station. If you’re not comfortable walking the further distance to the Metro station, knowing a bus will drop you off closer to your accommodation may be reason enough to figure out the bus system.
An even better reason to familiarize yourself with Paris’ buses is if you’re planning to be out late in the city. As convenient as the Metro may be, it stops running at midnight and doesn’t start up again until 5:30am. Out dancing at Paris nightclubs until 1 or 2 in the morning? That means your options are to either take an expensive Paris taxi, wander the streets until the Metro’s running again, or hop on a bus. The all-important Paris night buses – or “Noctilien” – run from midnight until 5:30am.
Finally, because buses are above-ground as opposed to the Metro or RER, you may not get as disoriented when moving about the city. You’ll watch monuments go by and have a better idea of where you are when you get off. And, if you get a good seat with a view, you could even use a trip on a Paris bus as an unguided city tour.
Here’s what you need to know about riding the buses in Paris.

If you’re familiar with how to read a Paris Metro map, then you’re off to a good start when you’re attempting to figure out a Paris bus map. The bus lines in Paris are color-coded and numbered, and directions are indicated by the station name at the end of the line. In other words, each bus line has two “names” – one for the station at each terminus – and the direction you’re traveling on a particular bus route is the name of the station at the end of the line in that direction.
Here’s a small (unreadable) version of a Paris bus map: 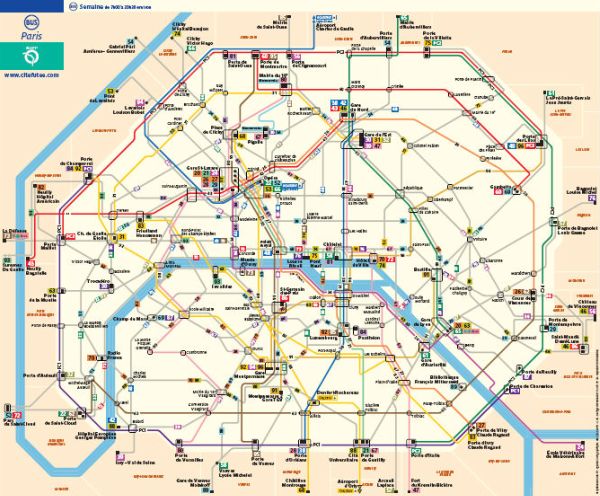 And here’s where you can get a bigger version of that map to print out and bring with you on your trip (it’s a PDF). It’s a good idea to bring a map if you can, because Paris bus maps aren’t as ubiquitous as Paris Metro maps in guidebooks and on brochure stands. You might get lucky and find one you can grab at a bus terminal (not a bus stop) or at the ticket window of a Metro station, but don’t count on it.

Thankfully the same company (RATP) that runs the Metro also runs most of the bus lines in Paris, so the tickets for both are identical.
Paris bus tickets, like Paris Metro tickets, are called T+ tickets and are sold individually for €1.70 or in a 10-ticket pack called a “carnet” (pronounced kar|NAY) for €12.00. Each ticket is valid for 90 minutes, within which you can ride as many buses as you like as long as you’re still in that 90-minute window.
You’ll need to validate your ticket upon first use, and if that’s on a Paris bus you’ll insert the ticket into a validator machine on board the bus after you get on. There are usually 2-3 machines at different parts of the bus, so keep an eye out. You can buy T+ tickets from ticket windows in Metro stations or bus terminals, from automated ticket machines in Metro stations or bus terminals (they have a language selection at the start so you don’t have to speak French), in some shops that have approval to sell them (often tobacco shops), and individually from bus drivers (they don’t sell carnet). 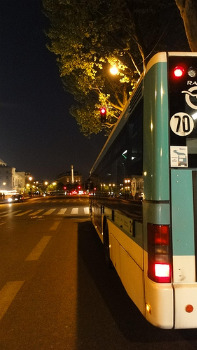 “Noctilien” is the name of the night bus service in Paris, and on signs night bus routes are designated by an N in a circle with a red star next to it. The bus lines themselves each have an N before the number of the line.
There are 42 Noctilien bus lines, and they operate only during the hours between when the last regular buses run and when the first regular buses start (which also happens to be the hours when the Metro isn’t running, either) – starting at 12:30am and stopping at 5:30am.
Noctilien lines connect all five of Paris’ major train stations and important monuments, but the night bus network of stops isn’t as intricate as the day buses. The best thing you can do is check with your hotel or hostel to see where the closest Noctilien bus stop is nearby (and ask what line it is, too), in case you’ll be out late.
Balabus
The Balabus is a very popular tourist-oriented bus line because it runs between the Gare de Lyon and La Defense, hitting many of the main tourist spots along the way. It only operates from April through September, and although you can ride it from start to finish using T+ tickets you will need to use three tickets if you go the entire length of the route. If you only ride it for part of the way, it may cost between 1-2 tickets.
Montmartrobus
As you might guess from the name, the Montmartrobus serves Montmartre. It operates year-round, and runs from Place Pigalle to points throughout the Montmartre area, including the popular Place du Tertre. Because the Montmartrobus is just part of the regular RATP bus network in Paris, it costs one T+ ticket to ride.

Learn more about how to use Paris buses from the official RATP site – they also have updated bus timetables as well as a very cool interactive map that covers not just the bus lines in Paris but also the Metro, RER, Noctilien, and more.
photos, top to bottom, by: vanz, Fanch The System