One Day in Paris: Three Ways to Love It! 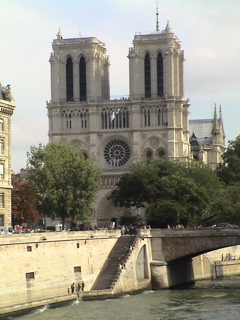 Photo by Chris Card Fuller 2008
Ask a Parisian or a long-time resident how he or she would spend one day in Paris, especially if it might be the first trip to Paris and the only trip to Paris. You won’t get an answer very quickly – what you get is a big sigh and a pause.
“Let me think about that!”
Because many boat tours and European tours only allow you one ‘free day’ in Paris, this is a dilemma for first-time visitors, so here are three completely different views about how to spend one ‘free day’ in Paris:
Option 1
Peter, who’s a 38-year-resident of English birth suggests this:
“Of course you have to see the Eiffel Tower if you come to Paris. The trouble is the lines are long. I haven’t gone up the Eiffel Tower for years, but even if you don’t actually go up the Eiffel Tower, you HAVE to see it.
Then I would go to Napoleon’s Tomb and Les Invalides Army Museum which is located in the same arrondissement (7eme). I’m interested in military history which is why I would choose to go to this museum.” 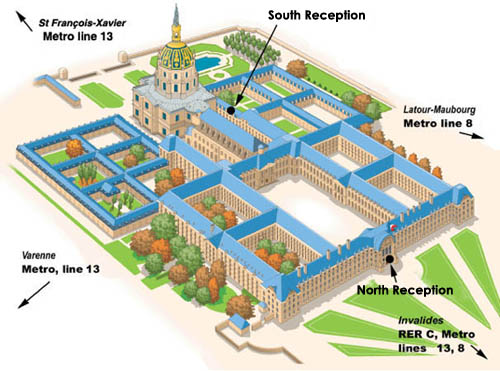 Louis XIV built Les Invalides as a veterans’ hospital for soldiers. Napoleon is buried just under the dome of Les Invalides. To access the Military Museum walk around the building to the entrance for the military chapel.
(Les Invalides also has some of the best toilet facilities in Paris!)
(Parisgirl adds a suggestion for those less interested in military history – the Rodin Museum at Metro: Varenne is actually walking distance from Les Invalides – so if you have people in your group who prefer to split up, you can easily visit these two museums in the same neighborhood, and then meet for an outdoor cafe lunch or picnic in the Rodin Museum garden or at the Champs de Mars underneath the Eiffel Tower.
A third museum option in this neighborhood is the newly inaugurated Musee du Quai Branly, specializing in African, Oceanic, Asian and Amerindian arts. The building was conceived by architect Jean Nouvel. You can also see other examples of his work at the Fondation Cartier, Blvd. Raspail, Metro: Raspail and the Institut du Monde Arabe, 1 Rue des Fosses St. Bernard, Place Mohammed V.
Peter also suggested that for anyone interested in technology, you might want to take a ride on Paris’s #14 (Meteore) automated Metro line (unfortunately, this line isn’t in the 7th arrondissement) but it does go to Bercy Village (Metro stop: Cour St. Emilion) which is a very nice spot to sip on some wine at Chai 33 wine bar and restaurant. Peter mentions that Paris’ newest Metro line runs underneath the rest of the subway system. For any of you who remember Paris’s Metro’s with wooden seats, you’ll see just how far the city’s come to providing some of the best public transport in the world (when they’r not on strike!).
2nd Option Nicole says that if she only had one day in Paris, she’d spend it in her neighborhood the 4th arrondissement, starting with Place des Vosges. Place des Vosges brings us back to the era of King Henry IV, the ‘galant vert’ or the ‘gay blade’. Now Place des Vosges is more gay in the contemporary sense of the word than the literary sense. If you choose to spend a day in the 4th arrondissement, you’ll certainly want to spend part of it at the Musee Carnavalet which will give you a good grounding in the city’s history. There’s a particularly good section on revolutionary Paris. Also, this museum is FREE!
I would recommend spending a day in the 4th arrondissement only if you don’t mind getting a little lost. You’ll want to be sure to have a good map or your ‘Plan de Paris’ before you venture into the Marais – the name for this district which used to be swampland. Another museum well worth a visit in the Marais district is the Museum of European Photography and the Picasso Museum. One of Parisgirl’s favorite boutiques in the district is GavillaneRue Mahler (if you like Gothic)
Option 3
Parisgirl agrees that catching a glimpse of the Eiffel Tower before you leave Paris is an absolute must – but the Eiffel Tower in the distance can be much more fulfilling (for some of us) as climbing and sweating in a crowd of people, squeezing into an elevator and trying to ignore the claustrophia. So here’s my choice for one day in Paris.
Hop on the RER B from CDG Airport and get off at St. Michel/Notre Dame. In my very humble opinion, Notre Dame Cathedral is where Paris begins – and I like starting at the beginning. If the weather is good, you can climb to the church rooftops and view the city (including the Eiffel Tower and Montmartre). Find a cafe on Ile St. Louis or wander over to the Left Bank and look for a couscous restaurant in the Latin Quarter. This is the students world in Paris, home to Abelard and Eloise and all those idealistic students who hoped to leave the world a better place. From Place Dauphine and Pont Neuf, you can hop on a Vedettes de Pont Neuf boat tour and enjoy a view of the Eiffel Tower (this is actually one of the best places for taking pictures!). Rainy weather? Drop into the Musee du Moyen Age at the intersection of Blvd. St. Michel and Blvd. St. Germain to view the unicorn tapestries. (The museum is FREE until the end of June ’08). If you’re a fan of stained glass windows, don’t miss the church/museum Sainte Chapelle located within the walls of the Palais du Justice on Ile de la Cite. You will need to go through a metal detector to visit this chapel so there’s often a line. However, the line normally moves quickly. Well worth the wait to see some of the most stunning stained glass in France.
So, you’re probably saying, what about the Louvre, what about the Champs Elysees, what about Montmartre? And the Musee d’Orsay? Yes, one day isn’t enough to visit more than one neighborhood, unless you love to walk or bike for long distances. You can certainly take one of Paris’s Open Bus Tours if you like to have the ‘full view’, but you may discover by trying out one of these three options, you’ll become so attached to a particular neighborhood, that you may return again and again to the places you love best in Paris.
Links to Paris Museums
Useful Tip:
Visit the War Museum, Napoleon’s Tomb at Les Invalides for FREE on Tueday nights until 9 pm if you’re under 26 years old!