Paris is the place to be this October if you’re crazy for cars. The biannual car show Le Mondial Automobile starts October 4 through October 19, 2008 featuring the latest trends in European cars, particularly French cars such as Peugeot, Citroen, and Renault. Hopefully, this year’s show will feature plenty of electric cars as the obvious remedy to our gasoline addiction.

The auto show will be held at the Porte de Versaille Paris-Expo convention center Metro: Porte de Versailles. Tickets are 12 Euros for Adults, 6.45 for Kids Age 10 to 18,and free for kids under Age 10.
Opening Hours: Tuesday to friday : 10 am to 10 pm
Saturday to Monday : 10 am – 8 pm

Now is the time to start booking your Paris hotel rooms. September and October are big convention months in Paris with rooms tending to fill up quickly. If you’re planning on attending the Annual Car show, you’ll want to consider hotels in the 15th or 14th arrondissements (which includes Montparnasse). Another consideration would be Issy-les-Moulineaux which is the first village on the outskirts of Paris and the next closest town to the Porte de Versailles Metro stop.

You can also save money on booking international airline tickets with Air France by checking out the Global Meetings. The Auto Show has its own reference number which will allow you a discounted rate. 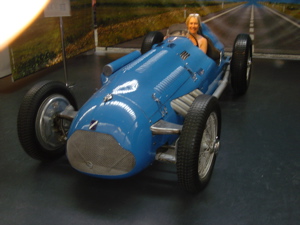 Your ‘Car Buff Holiday’ doesn’t have to stop in Paris at the Auto Show. Getting to Paris is simply a super jump-off point for some stupendous French car museums. Two of my favorites are the Mulhouse Cite de L’Automobile in Alsace (eastern France) and the Loheac Manoir de L’Automobile in Loheac, Brittany.

If you’re fan of luxury cars, you’ll love the Bugatti collection at the Schlumpf Cite de l’Automobile in Mulhouse in Alsace, and if you’re a Formula One fan, you won’t want to miss the Loheac Manoir de l’Automobile in Brittany. Both collections demand a full day’s visit. I’d be hard put to place a preference over either museum – both are splendid in their own way. However, Loheac also has a nearby racetrack. When we visited, a rally was in progress, so for those looking for the excitement of the racetrack, this is the place to go. 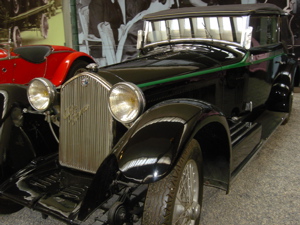 Crazy for Bugattis? Car enthusiasts can admire some 100 Bugattis (including the Bugatti /EB 16-4 Veyron) in 17,000 m² of exhibition space. This may well be one of the finest Bugatti collections in the world. With over 600 cars on display, including Rolls-Royces, Hispano-Suiza, Maseratis and Ferraris, this is a collection that will fascinate fans for hours on end. 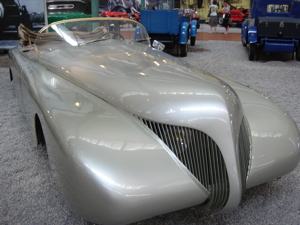 Mulhouse has the added attraction of a train museum within spitting distance of the car museum, so for those that love anything on wheels, from cars to trains, you could easily spend a few days in Mulhouse after the Paris car show. 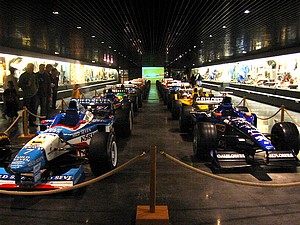 Loheac is a small village in Brittany, to the west of Paris. With 400 cars, including a section devoted to Formula One – this is definitely a destination for ‘hands-on drivers’. There’s the added possibilty of signing up for ‘driving time’ i.e. ‘pilotage‘. Loheac is the site of annual rallys as well. The town is a typically charming Breton village – a nice contrast to the bustle of Paris. When we last visited (in early September) we were able to enjoy the museum at our leisure – practically everyone else was at the racetrack! (Be sure to book rooms in advance!)