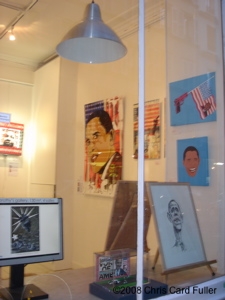 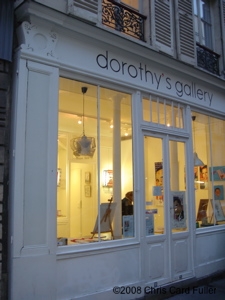 Both presidential candidates, John McCain and Barack Obama received warm ‘unofficial’ receptions at the Elysees Palace where they were welcomed by French president Nicolas Sarkozy at earlier dates this year. However, as the American elections approach, the name ‘Obama’ is on the tip of everyone’s tongue. If you happen to be an American visiting Paris, you will very likely be swept into a conversation either about Obama’s chances of becoming president or about Sarah Palin’s chances of becoming Vice President. French friends will tell us the difference in ratings between Obama and McCain even before we get a chance to pick up a copy of the International Herald Tribune.

So, it shouldn’t come as a surprise that ex-pats are excited about this year’s historic election – and celebrating the event according to their persuasions. Such is the case with Dorothy’s Gallery’s current exhibit ‘Obama in Paris’.

A number of artists have been invited to participate in this Obamafest of paintings, drawings, caricatures, etc., many of which remind me of 1960s collage art. I almost expected to hear Jimi Hendrix riffs drifting by in a purple haze. The surprising element of this show is the fact that the artists come from all parts of the world, from Shanghai, to Paris, and Paris to the USA. The Obama candidacy has inspired artists hailing from such varied geographic roots to record this moment in time in their own fashion.

Aside from paintings, Obama supporters will also find a variety of t-shirts, mugs, buttons, etc. Perhaps the only irony of this show is its name ‘Obama in Paris’. I only mention this because during his ‘non-official’ visit to the City of Lights, Barack Obama stayed for less than three hours en route to London. The Obama in Paris exhibit runs through till November 17th, and even includes a ‘Victory Night’. 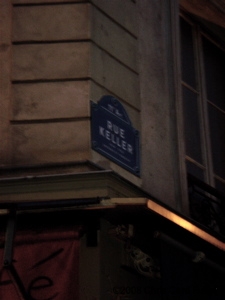 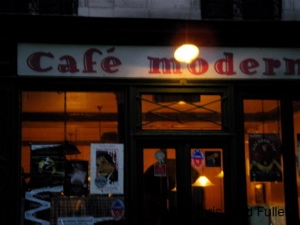 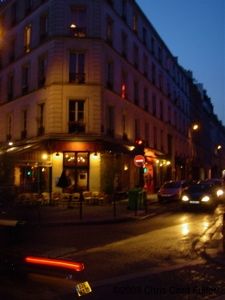 Regardless of your political persuasions, Dorothy’s Gallery provides a good anchor for ‘English-speakers’ to start their prowl of this quirky Rue Keller neighborhood located in Paris’s 11th arrondissement. Not as upscale as the ‘bobo’ Marais district, you’ll find that Rue Keller’s boutiques resonate of sixties/seventies Greenwich Village nostalgia, minus the blacklight posters. Western wear is big here, a little bit of kitsch, and local bars where you expect the likes of Mickey Rourke to surface.

You may find this neighborhood, far from the tour buses, and far from the suits, to be just the place to settle in for a beer or a ‘vin chaud’ on a cold winter’s night and ponder the meaning of life with or without “Obama in Paris.”

“Everyone interested in art can enter this galery and become an owner of a piece of art which they may have thought to be inaccessible.” (Thanks to digital processing, signed copies of original art work can be made available to those who would like to own an artist-signed copy at affordable prices).