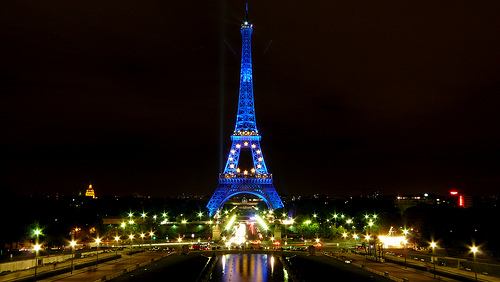 Nuit Blanche, which translates as literally as “white night” and is an expression for all-nighter, is an annual arts festival that takes place from sunset until sunrise on the first Saturday and Sunday of October. Museums , private and public art galleries, pools, cafes, theaters, libraries and other cultural institutions around the city join bars and clubs staying open all through the night for revelers—all for free. It’s a veritable cultural smorgasbord in a city full of culture and art.

Nuit Blacnhe also brings art installations to the center of the the city and many music, dance, films and performance artists perform at themed gatherings around the City of Lights. The first Nuit Blanche took place in Paris in 2002, when for the first time a trail of contemporary art flowed through the city through the wee hours and allowed travelers and residents alike to soak up the artistic scene in Paris.

Since its launch in 2002, Nuit Blanche has become a hotly anticipated event, drawing more than 1 million people the last few years out of their beds and into the streets of Paris. Paris lights up this night, with everything staying open (even public swimming pools) through the night with free admission.

There are elaborate light installations, edgy performances, concerts and sights and scenes for everyone. This is the perfect time to soak up the artistic culture and scene in Paris, as well as get a glimpse into the dynamic and always interesting city in a new light (or lack thereof).

If you survive the entire night of art, culture, swimming, eating, drinking and general merry making, Nuit Blanche participants will also find breakfasts laid out out at the City Halls around the city for hungry and tired revelers.

This video from Nuit Blanche several years ago gives you an idea of what to expect: