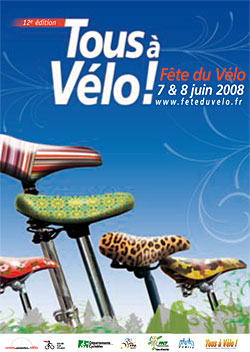 Every first weekend of June, bicycles rule the road in France. This year in Paris, (Saturday, June 7, 2008 and Sunday June 8th) many of the activities and demonstrations will be found at the Bike Festival Village created especially for the Fete du Velo. You’ll find the village near the south entrance to the Luxembourg Gardens at Rue August Comte.
As part of Paris’s 12th annual Bike Fest (Fete du Velo) (2008), the International Cyclonudist (Velorution) will start at 2 pm Jardin de Reuilly (12th arrondissment), Saturday, June 7th and pass through the Bike Fest village around 4:30 pm. Have your cameras ready for a sight rarely seen on the streets of Paris.
>> And if you want to go where being “au naturale” is the norm, then check out France’s nude beaches, too!
Jardin de Reuilly (75012)

View Larger Map
For those interested in a more traditional bike outing, join in the night time bike ride departing from the Bike Fest at 8 pm and returning around 11 pm.
A rollerblading (Roller Squad Institute) will also be assembling at 8 pm, departing from Trocadero Gardens.
Sunday, June 8th, discover Paris’s Bois de Boulogne. A bike outing will assemble at 2 pm and return at 5 pm.
The hours for the Bike Fest village are 1 pm to 7 pm Saturday and 10 am to 6 pm Sunday, June 8th, ’08.
Another rollerblading outing will assemble at 2:30 pm departing from Place de la Bastille.
Not only Paris, but thoughout France towns will be allowing bicyclists one day to have the run of the town.