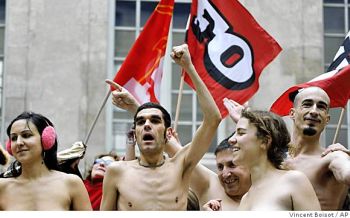 Anyone who knows anything about the French knows they love to strike. At least once a year, Parisians find themselves fighting through crowded subway tunnels when the Metro drivers strike, stranded in another part of the country when the train driver’s strike, or recently, stuck with kids at home when school teacher’s strike. When workers don’t like the way they are being treated, there is no hesitation for walking out on the job and promote an attention-getting strike. While these strikes are sometimes successful, they rarely incite much reaction out of the French besides general annoyance, usual sympathy for the strikers and perhaps some muttered French curses and a “Mais, encore une greve?” However, a recent strike/protest in Paris certainly got a different kind of attention—because this time the people making noise were naked.

On Monday, about 15 art school nude models braved the chilly Parisian temperatures and stripped outside of Paris’ cultural affairs bureau to protest a new municipal order that would ban the longtime practice of tipping nude art models.

While the order only affects about 100 people and the practice of tipping nude models has apparently long been banned (and just not strictly enforced), city official reassured naked protesters that they would discuss other ways of boosting the models’ 11 Euro/hour pay.

While nude models have been inspiration for some of France’s greatest painters, some claim the practice of tipping could be blamed for unaccounted money changing hands at city-funded art schools.