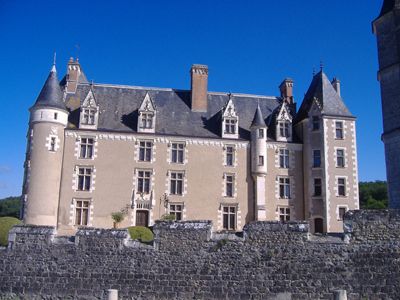 “Virtue is gained by suffering.”

I am dedicating this post to the AIG ‘feckless financiers’ who were reported to have celebrated the economic meltdown by booking an $86,000 partridge hunt at the 17th century Plumber Manor in England. (as mentioned in Maureen Dowd’s NYTimes op ed story After W., le Deluge). My only question about this hunting venture, or misadventure – is why didn’t they come to the Chateau Montpoupon instead?

If they had chanced upon this idyllic chateau – far away from the London News reporters’ beat, chances are, they could have sipped their fine French wines and hunted in peace, but getting back to the quote regarding virtue.

One of the previous residents of the chateau had decided to emblazon this proverb above the mantle of the fireplace in the bedroom where he imprisoned his wife for fifteen years as punishment for her adulterous behaviour. (You can see this bedroom decorated just as it would have been while the poor lady spent her best years of her life in solitude).

Now there’s some food for thought. Not that I would suggest that AIG financiers might deserve any similar sort of treatment, but perhaps being locked in a room for fifteen years might be an ideal opportunity to meditate upon the subject of ethics. Maureen Dowd was much more pragmatic, suggesting the guillotine. In any case, it’s ironic that in times of dire need (i.e. the American Revolution, and now), we look toward France for consolation.

And what better place to heal one’s economic wounds than in the Touraine region (just a hop,skip and a jump from Paris) via train or via car on the A10 (the Route de Soleil) to Chenonceaux. From there, it’s a ten minute drive to the Montpoupon chateau and hunting museum. (There’s no relation between Montpoupon and the Grey Poupon mustard).

Named after a Germanic tribe, the Poppos, who inhabited the area during the time of Charlemagne, the castle has gone through several transformations (rebuilt after the Hundred Years War, and restored in a Renaissance style in more recent years) and several owners. Unlike other more famous chateaux in the Loire Valley, this one is still privately owned. A rich tradition of hunting is linked to the castle – and for hunting buffs, the adjacent museum is brimming with turn-of-the-20th century hunting paraphanalia, postcards, and far too many dead stags, including one who was famous for fighting back. The hunting ‘equipe’ or team’s private quarters are furnished according to how they would have looked during the era of the photos. Although hunting groups still rendez-vous at the chateau, the heyday of family hunts are long gone.

Another quality that sets Montpoupon apart from some of the larger and more famous chateaux is the fact that each room is decorated as if its resident had just decided to step outside for a breath of air. (Which is pretty close to the reality). Behind the chateau, in the location where you might expect to see an expansive ‘jardin a la francaise’ the current owner decided to create a ‘lawn-mowed’ garden. Using a huge mower, the ‘garden’ is a vast expanse of green in varying shades in textures. A stream winds its way through the valley creating a glistening almost metallic contrast to the lawn.

Old postcards show photos of the past hunts with all the dogs clustered in front of the castle. You can learn a lot about hunting during your visit to the Hunting Museum, such as the terms for each member of the team and the role of the hunting horns.

The Weekend of the Toussaint or All Saints Day (November 1st) is normaly one of the busiest Fall holidays in France, so if you plan on traveling outside of Paris this weekend, be forewarned. Traffic is particularly intense on the A10, Friday evening and Sunday evening more the return trip to Paris. 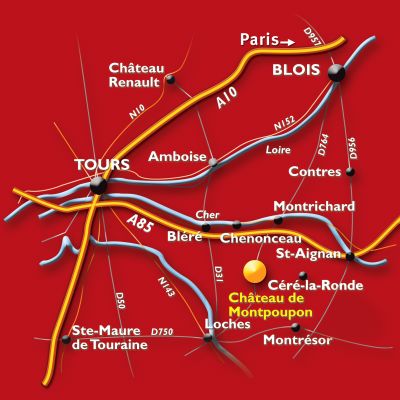 Getting to Montpoupon:
During the November, Montpoupon is open only on weekends (and closed during the lunch hour 10 am to noon and 2 pm to 4 pm.
Closed during all of January. Open daily from April to September.

The château is situated in Touraine, 240 km from Paris on the D.764 between Montrichard (Loir-et-Cher 41) and Loches (Indre-et-Loire 37), and 10 km east of Chenonceaux.

Duration of journey from Paris:
– Two and a quarter hours on the motorway A10 (L’Acquitaine).Exit Blois or Amboise);
– 60 minutes by high speed train (TGV) from Paris/Montparnasse to Saint –Pierre-des-Corps, Tours;
– 20 minutes by TER (local service) Tours-Montrichard.