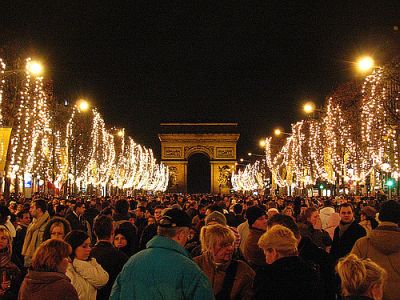 Even with all the pomp and celebrations surrounding Christmas in France, the French always have enough steam to carry on with boisterous celebrations through the New Year. Christmas in Paris is actually one of my very favorite times of the year in the City of Lights. It’s a time when the City of Lights becomes even more light up. Fabulous Christmas window displays, lights lining the Champs Elysees, giant Christmas trees, the Paris Christmas markets, the Galleries Layfayette sparkling with Christmas cheer, the oysters and Champagne all make the holiday season in France an especially magical time to be in Paris.

Paris has been ranked over and over again as one of the best places in the world to ring in the New Year. In France, New Year’s Eve is referred to as Saint-Slyvestre and New Year’s Day is called Jour des Eternnes.

While there are certainly plenty of big parties to ring in the New Year and you can celebrate anyway you want from hitting the club scene to getting invited to a classy party to drinking champagne and watching the fireworks burst colorful streaks into the air behind the Eiffel Tower, traditionally the New Year was rung in with a feast called le Reveillon de Saint Slyvestre, which is usually a meal started late in the night and eaten into the early morning hours of the New Year (Reveillon comes from the word, reveil, which means “wake” in French).

Unlike in the U.S., where kissing under the mistletoe is a Christmas tradition, in France everyone kisses at midnight on New Year’s Eve under the mistletoe (called le gui in French). New Year’s Day in France (Le Jour des Enternnes) is a national holiday (i.e. everything will be closed) and is spent among friends and family, who often exchange cards and gifts in honor of the New Year. In fact, the New Year is not just celebrated on January 1, but continues for several days until January 6 (the Epiphany), in which families have celebrations and cut into a la galette des rois (a cake with a small king figurine baked inside).

The French also celebrate the New Year or Saint Slyvestre though the entire month of January. Don’t be surprised if you hear a French person wishing you a “Bonne Annee” well into the month, don’t be surprise—or be shy to return the well wishes.

Flights to Paris for New Years

While winter fares to Paris tend to be much lower than those in the summer, this excludes a small frame of time right around the Christmas and New Year holidays, when everyone wants to head to Paris. If you are hoping to get a good airfare to Paris for this time of year, you are best off booking very far in advance. You can also sometimes luck out and get a great minute deal, but this is not reliable and waiting could leave you sitting at home on December 31 with a bowl of popcorn and your television rather than out celebrating with champagne on the Champs.

Another way to score a potentially cheap ticket to Paris is to fly on Christmas Day. While this is certainly not an option everyone would opt to take, flying on Christmas day is usually a fantastic way to save money and get a get a cheap airfare to Paris just in time to ring in the New Year.

Where to Stay for New Year’s in Paris

The holiday season is a a busy travel period in Paris especially, so keep in mind you’ll want to book your Paris hotel well in advance if you are planning on being there over the New Year. You might also see elevated rates surrounding the holiday times, so expect to pay a little more if you plan on spending this time in the City of Lights.

If you are trying to stick to a tighter budget, you can also opt to stay in one of the many Paris hostels. Keep in mind hostels will also book up well in advance, so make sure you make your reservations as early as possible. If you are looking to party hard to ring in the New Year, perhaps opting for one of the best party hostels in Paris is your best bet. If the party hostel scene isn’t so much your thing, find exactly what kind of hostel is best for you in the Paris Hostel Guide. 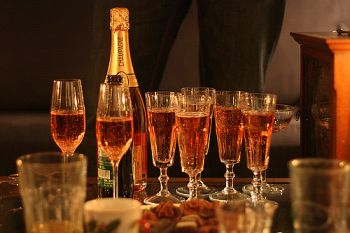 There are a host of different ways you can enjoy New Year’s Eve in France. If you are lucky, you’ll be invited to a private party, where you can sip champagne and dance without having to shell out serious cash. From fancy cabarets to parties at private restaurants to crowding the streets of the Champs Elysees, there is certainly no lack of things to do on New Year’s Eve in Paris.

Where to Watch Fireworks 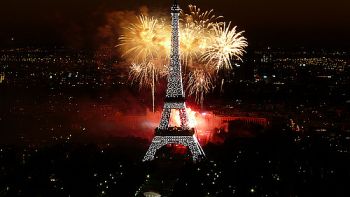 For a New York Times Square kind of experience, you’ll for sure want to head straight for the Champs Elysées. Starting around 9 p.m. on December 31, people will start to flock to the famous street, often with bottles of bibbly and plastic flutes in tow. From many places on the Champs you can get a great view of the fireworks sparkling behind the Eiffel Tower.

One of my favorite views and neighborhoods in the city, the top of the hill in Montmartre (which is graced by the Sacre Coeur Basilica) provides an excellent view of the city and fireworks exploding below. If you are in search of being out and about, but want a celebration that’s a little calmer than the one on the Champs Elysees, this is the perfect choice.

While still crowded, this vibe in Montmartre is considerably more subdued than on the Champs Elysees, and celebrating at one of the many bars, cabarets and clubs in the nearby Pigalle is a great way to spend a festive, alternative New Year’s Eve in Paris.

The large field/park in front of the Eiffel Tower will give you a front row seat to the fireworks display that happened behind the iconic French structure. Families, couples and groups of friends often starting arriving early in the evening with blankets, picnics, bottles of champagne and plastic flutes to stake out a spot for the fireworks.

**Much to the surprise of many (I was included in this bunch), it is actually legal to buy and sell fireworks in Paris. While my mother detests this (we were never allowed to set off our own fireworks growing up), you will see many street celebration with small (and not-so-small) fireworks being fired off. Be aware.

Another great way to ring in the New Year in Paris is to spend it floating down the Seine. Pairs boat tours are a must-see for visitor’s to the city, and taking in a dinner nighttime cruise on New Year’s Eve can be a great way to celebrate the end of the year.

Boat dinner tours also often a more laid back vibe and festive ambiance. However, keep in mind that these cruises will not be cheap.

The Bateaux Parisiens offers a New Year’s Eve dinner cruise that includes a bottle of Pommerory champagne, musical entertainment, wines and a fixed price menu that starts a about €300 and goes up to €600. 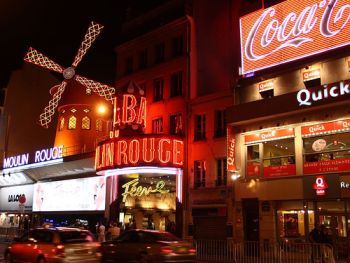 If you’ve got some serious cash burning a hole in your pocket or have been saving up for a New Year’s Eve blowout in Paris for quite some time, than you may just want to head to the famous and classic French Cabaret the Moulin Rouge. For about €600 you’ll enjoy an evening of foie gras, lobster, champagne, dancing and music with the Moulin Rouge orchestra and a post-midnight show. There is also a surprise gift for each guest.

For about the same amount of money, you can also head to Lido, another famous Paris cabaret located on the Champs Elysees. Like at the Moulin Rouge celebration, you’ll enjoy a meal with foie gras, lobster and champagne and will see live music, a specially choreographed show and post-midnight festivities.

Paris is a city chock full of clubs where you can spend your New Year’s Eve dancing the night away. You’ll want to check with individual bars and clubs to see if they have special higher covers or events going on that night before you show up. No matter what your budget, however, you’ll probably be able to find some sort of club or dance party that you can afford and enjoy in Paris.