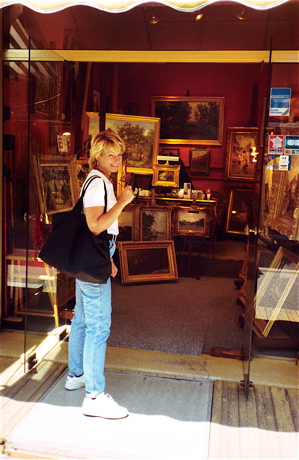 It’s January in Paris. Let the sales season in Paris begin. The word for sale in French is ‘solde’. If there’s one reason to come to Paris in January, it has to be wintersales which officially begin January 10th. January 10th to the 20th are the sale dates promoted by the City of Paris, the Chamber of Commerce and the Visitors Bureau. You’ll want to be sure to visit the site www.soldesbyparistouch.com which maps out five distinct ‘shopping itineraries’: Chic, Trendy, Romantic, Original, and Creative circuits. I’ve checked out the routes and I’m eager to try out the ‘Original’ circuit which begins at the St. Ouen’s flea market and ends up for drinks at the Fleche d’Or bar. (Check out the Trash Fashion video for Jan. 28 ’08). Yet another New Year’s resolution!
You’ll also notice that the Soldes by Paristouch site includes listing of daily events during the January sales period. Another thing I like about these five shopping routes is the fact that you won’t get stuck in one department store. To really appreciate the Paris’s boutiques, you need to put on your walking shoes and find the right streets that suit your style.
Just as a very general guideline to get you started, you’ll find major designer stores concentrated around the Champs Elysees and Charles de Gaulle Etoile – primarily Avenue Montaigne and Rue Faubourg St. Honore. Paris’s most expensive jewelry stores circle the Place Vendome. The majority of us will enjoy looking at the windows – but you can keep walking toward the Rue de Rivoli arcade to find a variety of boutiques with more affordable souvenirs.
The Marais district is dotted with more trendy boutiques. You can start by walking around Place des Vosges and work your way toward the St. Paul Metro stop and Rue des Rosiers. (In a past post, I’ve mentioned one boutique Gavilane for Gothic wear).
14, Rue Malher
75004 Paris, France
+33 1 48 87 73 13
+33 1 48 87 73 33 – Fax
A word of warning if you decide to take on Paris’s two major department stores – Galeries Lafayette and Printemps – both of these huge stores located on Blvd. Haussmann are sure to be jampacked during the winter sales. Don’t say you weren’t warned. You’ll note that directly behind Printemps and Galeries Lafayette, a pedestrian walk way is also lined with many smaller boutiques. Rue Chausee d’Antin is also a popular shopping street in this neighborhood.
On the Left Bank, designer boutiques dot Rue du Cherche Midi, Rue de Grenelle, Rue du Four and the labyrinthe of streets connecting St. Sulpice to Boulevard St. Germain. Too expensive for your budget? Head toward Rue de Rennes where you’ll find some of the less expensive chains such as 1, 2 3, Mango, Zara, plus tons of shoe stores.
May the best shopper win.
Photo by Chris Card Fuller ©2007
Maryanne Russell in Paris. Visit her site!