New Friends for the Eiffel Tower 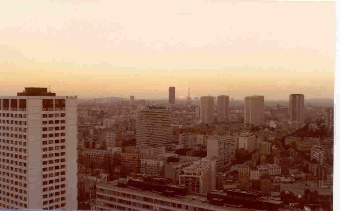 It must get lonely at the top – even for the Eiffel Tower with its millions of visitors. How must it feel to be a beautiful tower and have so few other tower friends?
Soon the Paris landscape will bring in a new friend for the Iron Lady. His name is Signal and he’ll be gazing at Mlle Eiffel from across a crowded Paris – all the way over in La Defense.
At 301 meters, he’s still just a tad short for Eiffel at 324 meters, so she’ll have to leave her high heels at home.

Architect Jean Nouvel has just received the commission to construct a new skyscraper in the Defense district (which technically is not within Paris city limits) yet part of the city’s aesthetic lines. La Defense’s highrises can be seen if you stand on the Champs Elysees and look beyond the Arc de Triomphe. In the distance, you’ll probably be able to make out La Grande Arche, one of former President Francois Mitterand’s grand projects for a ‘Grand Paris’.
(In French, grand can mean great, but it can also mean tall). If you recognize the name Jean Nouvel from past posts, you already know about some of his past he’s triumphs. Most recently, he won the coveted Pritzer prize (like the Nobel or the Oscar for architects). He’s designed no less than three major museums in Paris –including the 2006-inaugurated Musee du Quai Branly. The Institute of the Arab World’s light senstitive façade is also another example of his ingenuity. One of my favorites is the Fondation Cartier with its integrated garden.

The new project for yet another La Defense skyscraper might have been boring if it weren’t for the fact that Nouvel will be at the helm. The 301 meter, 71 floor skyscraper will include offices, residential housing, a hotel and restaurants. The projected delivery date is Christmas 2013.
Nouvel says “It’s necessary to change the skyscraper’s persona.” Not just a shell for offices (a la Tour Montparnasse), The Signal will be a mix of work and leisure. No need to commute – you just take the elevator. At least that’s the concept.
I’m always eager to see what comes next on La Defense horizon simply because it’s so alien to its City of Paris neighbor. More precisely, one feels like one’s landed on Mars during as one strolls along the Grande Arche esplanade. La Defense makes a great playground for grand architects, but by no means do you have to take the hike all the way to La Defense to see some other ingenious architectural gems (and they don’t receive anywhere near as much press!)
One of my favorites is Francis Soler’s Ministry of Culture and Communication building.
Ilot des Bons Enfants, Rue St. Honore 75001. At first glance you may think this is just another building going through a restoration phrase. But then, you realize that the tracery is here to stay. Soler took his inspiration from a 15th century Italian artist for this unusual façade. Described by Archilab.org as a ‘prolific architect, bubbling over with ideas’, this is also a building that you can’t miss if you’re exploring the Paris passages in the same arrondissement. 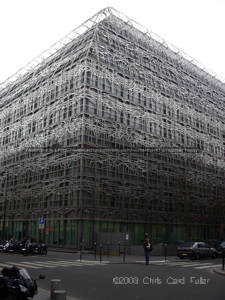 If you walk from the 1st arrondissement eastward toward Les Halles district, you can stop in front of the failed project for renovating Les Halles (which was originally Paris’s wholesale food market). Find a park bench (if you can) and draw up your own sketch for a new Les Halles.
Centre Pompidou, most commonly known as the oil refinery (Enzo Piano) continues to be a magnet for foot traffic. Whether you love Pompidou or hate it, this is one building that can hardly be ignored. Built in the mid 1970s, Centre Pompidou is actually beginning to meld into the Paris landscape.
I would definitely recommend heading further east toward Metro Bercy to see the Frank Gehry’s Cinematheque Francaise building at 51 Rue de Bercy. It’s another building that just doesn’t seem to get much press, but hey when you’re lined up next to the Eiffel Tower, everything else is just icing on the cake.