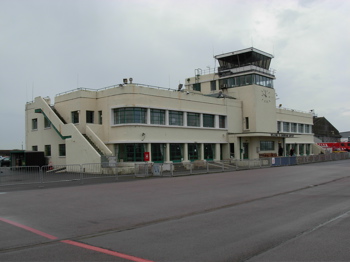 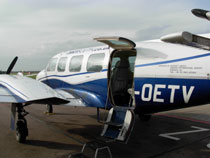 As of August 1, 2007 SKYSOUTH has added twice-a-day weekday flights from Brighton (Shoreham-by-the-Sea), England to Paris (Pontoise). Skysouth has a fleet of twin engine PA-31 Piper Chieftains which have been shuttling passengers from southern England across the Channel to Caen, Le Havre and Le Touquet in Normandy for the past few years. Since early last year, the company saw the need for a connection between Paris and England’s south coast. Even though there are a plethora of cheap flights connecting Paris to London and other UK hub cities, no direct flights could be had for England’s south coast.

Paris is well connected to the UK by Eurostar from Waterloo and Ashford, but there are no convenient services to Paris from the south coast apart from the SKYSOUTH service. There are no services from Gatwick and Eurostar are downgrading their Ashford services when the new St Pancras terminal opens in the Autumn.

If you’re an aviation history fan, you’ll feel a twinge of nostalgia when you land at the Shoreham Airport located in Shoreham-by-the-Sea on the A-27 between Brighton and Worthing.

The Art Deco Shoreham airport is the oldest municipal airport in England, and it was chosen to represent Paris’s Le Bourget airport in the film The Da Vinci Code. If you’re planning on doing a Da Vinci Code tour of Paris, what better way to start or finish your trip?

SKYSOUTH services fly you to Pontoise airport which is conveniently(??)(That’s SKYSOUTH’s words, not mine!) located 35km northwest of Paris on the main A15. Flights will depart Shoreham (Brighton City) Airport twice a day every weekday for the seventy minute flight to Paris (Pontoise). A shuttle coach is available only with prior reservation for the forty minute (depending on traffic) journey to the center of the French capital. Book your shuttle coach seat for 20€ with Capitol Shuttle.

SKYSOUTH is based at Shoreham (Brighton City) Airport and offers frequent services to Northern France as well as its twice-a-day weekday flights to Paris (Pontoise). There are six departures a week to Caen and seven to Le Havre with flights to Le Touquet operating weekends.

SKYSOUTH also likes to think of itself as more ‘laid back’ way to travel saying that its location between the sea and the South Downs, just to the west of Brighton, adds to the feeling of air travel as it used to be. No queues, no lengthy formalities and no need to get to the airport hours before departure.

All this sounds pretty good. Prices start at 89 Pounds one-way.
Maybe this is an interesting alternative if you’re traveling light and you don’t mind the 35 km commute from Pontoise for 20 Euros.
Considering that it costs 14Euros for the Air France shuttle form CDG to Paris, this seems like a fair price for the shuttle service.

Want to know more about other Cheap Flights to Paris?
Here are some useful links:
Cheap International Flights