Need to Know:How to Dress for a Presidential Campaign 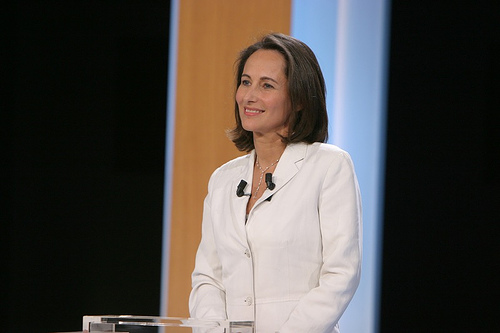 From the site:www.jakouiller.com
The Big ‘C’ was never an issue in France

What can Hillary Clinton, Barak Obama, John Edwards, and whoever the Republicans decide to put forth- learn from Segolene Royal’s and Nicolas Sarkozy’s clothing choices for the presidential election campaign last spring?

You may say – how superficial can you get? But, now that the New York Times and the Washington Post decided to take on the Big C issue (Cleavage, not Cancer) and the the Economist has decided to report John Edward’s alleged $400 haircut (do $400 haircuts EXIST? tell me, there HAS to be something else thrown in with that haircut), maybe it’s time that U.S. presidential hopefuls start looking at some clothing decisions that caused Sego hecklers to pounce. Well, there was the time she went back home to change her blazer. And some felt for the debate with Sarkozy, her choice of black skirt and navy blue blazer just didn’t look ‘presidential’. Even adversaries agreed that Sego has great legs and still looks better in swimming attire than Sarko, but the Big ‘C’ never was an issue.

You say that things like this shouldn’t make a difference in an election. After all, it’s the issues that matter. But by the time elections roll around, any candidate worth his or her salt should make sure that his/her stand on the issues is well known. The ‘finitions’ of personal style are just proverbial frosting on the cake.

Meanwhile, what I REALLY would like to know is, “How much does Nicolas Sarkozy pay for a haircut?” Because, quite honestly, I have a problem with $400. It makes Bill Clinton’s $200 haircut seem like a bargain. Do you really want a guy running your country who can’t manage to get a haircut for a decent price?

Trivia for the Day: What year did French women get the right to vote?