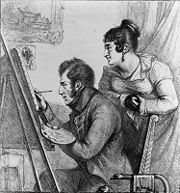 Every day hundreds of tourists rush toward the Denon wing of the Louvre, rarely bothering to wonder about the man for whom this museum wing was named.
Baron Dominique-Vivant Denon studied to be a lawyer but he ended up becoming the confidant of kings, mistresses of kings, and emperors, starting with Louis XV, Madame de Pompadour, straight on through to Napoleon. Hired by Napoleon as the acquisitions director for the new Napoleon wing of the Louvre museum, Denon was most often described as ‘Napoleon’s Eye’.
If ever there were a life that screams for a movie adaptation – this is it. Baron Denon, lawyer turned artist/architect/playwright wrote his first play at age 23.
He was a favorite at Louis XV’s Versailles court. And he had an uncanny knack for weathering the French revolution amid so many fallen heads. It was thanks to his friend and fellow artist David that he survived the revolution. David secured him a job as a republican uniform designer.
He met Napoleon – and it was the beginning of yet another beautiful friendship – accompanying him on his expeditions to Egypt – and consequently creating the anchor for the Louvre’s Egyptian department – his curatorship lasted well into the Restoration Era so Denon’s influence on French culture lasted through two kings, a revolution, an emperor, a citizen king and a republic.
And if you might think that Denon would be considered a ‘pillager’ of Egyptian cultural artifacts, take a look at what the Egyptian State Information Service writes about Denon, the man who said this:
“I don’t think the Greeks added anything new; nothing more magnificent than what I see and nothing is more refined or simpler than these few lines that constitute the Egyptian architecture. The Egyptians never imitated other nations; they were keen on drawing simple lines void of unnecessary ornaments. Thus, their architecture design reached the top of accuracy and simplicity. Lines have their holy spirit.”
I don’t think Denon would mind nowadays if the majority of people passing through the hall that bears his name don’t stop to nod ‘hello’.
His life was so rich with adventure – that the treasures he acquired for Napoleon’s museum may, in some ways, pale to a well-lived life.