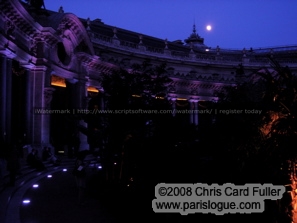 Every year Museum Night just gets better and better. If you can coordinate a visit to Paris with Museum Night which occurs annually in mid May(this year was May 17th), you’re in for a treat. Museum night begins at 6 pm. Some museums close as early as 9 or ten pm while others will remain open until 1 am.
We waited till the last minute to decide about which museums to visit. With over sixty museums participating within the Paris city limits, you can imagine that this was no easy choice.
We narrowed it down to three museums – the Army Museum at Les Invalides, the Grand Palais and the Petit Palais.
Les Invalides- Army Museum 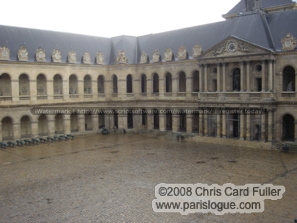 What clinched it for me was the Army Museum’s buglers concert in the Grand Salon followed by the National Guard’s cavalry parade. If you have yet to visit Les Invalides and Napoleon’s Tomb, you’ll find that the adjoining Military Museum is a colossal construction that (in my opinion) rivals the Louvre. Whereas the Louvre’s ornate decor symbolizes France ‘at ease’, Les Invalides maintains the strict lines and harmony that create an imposing yet pleasing ensemble. Commissioned by Louis XIV in the 1670s, Liberal Bruant was the architect responsible for the portion of this building which served as a hospital for war veterans. Mansart built the gold leaf dome structure which now houses Napoleon’s tomb.
The interior courtyard or parade ground of the Army Museum flanked by cannons has the symmetry that neat freaks will adore.
Tucked away in the upper level, the Grand Salon presides, a discreet sanctuary of grandeur in an otherwise spartan framework.
We arrived just before 7 pm for the buglers concert and were turned away at the door. We weren’t alone – about thirty to forty of us who arrived too late for a seat – milled around waiting to hear the first strains of the buglers concert. Meanwhile, a spring thundershower pounded the cobblestone courtyard while we remained well sheltered under the arches.
Make no mistake. This buglers’ concert was no match for the last recording of the trumpeter Landfrey for the Charge of the Light Brigade. (You’ll remember that battle, of course, as one of the few battles where the French, the British and the Turkish fought side by side against the Russians!!).
If you were one those caught in last night’s downpour, you couldn’t have been more dispirited than the National Guard’s cavalry. But they arrived in full regalia, and we were there to capture their arrival. 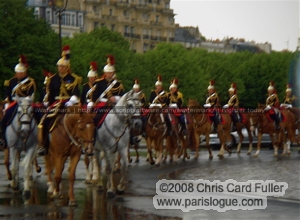 If you decide to visit the War Museum, you can choose one of two Metro stops: Invalides or Varenne. Varenne will place you closer to the side facing Napoleon’s Tomb (and incidentally Musee Rodin). The Invalides stop will place you between Pont Alexandre bridge and the War Museum side of the huge Invalides complex. Either way, plan on walking a distance from the Metro exit to the main museum entrance.

Grand Palais
You can walk from Les Invalides to the Grand Palais and Petit Palais which are located just across the Alexandre bridge on Paris’s Right Bank. (You can hop in the Metro at the Invalides or Varennes stops and go as far as Champs Elysees) If it’s a nice day, save yourself 1.50 Euros and walk across the bridge to the two Palais that face one another.
You may have read that the Grand Palais and Petit Palais have recently undergone vast restoration work. Originally these buildings were only meant to be ‘temporary structures’ for the Belle Epoque Paris exposition. Over a hundred years now, and they’ve stood the test of time – with a lot of TLC. The Grand Palais’s huge glass dome had to be completely renovated. Likewise, the Petit Palais has finally received the attention it truly deserves to become one of the most delightful venues in the neighborhood.
The Grand Palais is only open for temporary exhibits. Currently the American sculptor SERRA’s monolithic 2001 Space Odyssey style slabs dominate the Grand Palais. Even though Museum Night is free, we still had to pay 4 Euros for this show – which was definitely worth the combination of the exhibit and concert. The Marie Antoinette show is exhibited in another section of the Grand Palais – we lingered for so long at the Serra exhibit that we didn’t get to that show. However, if one of your goals in visiting the Grand Palais is seeing the new glass dome, you’ll need to be sure to enter by the main entrance. Tickets for the two shows are sold separately.
Even if there were absolutely nothing in the Grand Palais, it would still be worth the price of admission just to marvel at the glass structure and its ornate Belle Epoque staircase. But there’s still work to be done. Here is a word of warning for any of you using the restroom facilities. Note that the concrete just before the restroom facilities is pockmarked and extremely conducive to twisting ankles. Beware!
Also, I wouldn’t recommend the overpriced concessions snackbar. Very glitzy, but very mediocre. 6 Euros for an asparagus soup which had a crunch that could come only from sand or glass. By eight pm, the concessions bar had run out of food. If you get hunger pains, wait until you go across the street to the Petit Palais which has an excellent garden-side snack and wine bar. The prices are high also (12 Euros for a club sandwich) but the setting is tranquil and relaxing.
Petit Palais
Make no mistake. Neither the Grand nor the Petit Palais or palaces. They were both built as temporary exhibition centers, but given the flair for ostentation of the day, creating the ‘illusion’ of a palace was almost as good as a Las Vegas reendition of the Eiffel Tower. Not many years ago, the Petit Palais, home to temporary exhibits seemed like a neglected middle sister. Now she has blossomed into a full-fledged beauty.
If you haven’t yet strolled through the Petit Palais’s half-moon garden, a rich protrusion of palm trees interspersed with iris and poppies, you’re in for a treat. Currently, the Goya engravings occupy the temporary exhibits corridor, but there’s also a permanent collection well worth the detour. This is definitely the place for your lunch or early evening dinner break. 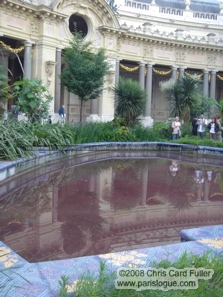 Even though the majority of museums offer completely free admission (with the exception, for example, of the 4 Euros charge for the Serra exhibit) huge lines formed entrance to both the Petit and Grand Palais. However the good news was that these lines moved quickly. Just enough people were allowed admission to allow visitors enough room to view the art work and not be crushed.
Museum Night may be one of the best things ever to happen in the French cultural scene. Although I heard some English spoken, the majority of people attending this event were French. I’m not sure if English-speaking visitors simply haven’t heard yet about Museum Night – or maybe they were all at the Louvre and the Musee d’Orsay. In any case, if you haven’t yet attended Museum Night, which occurs not only in France, but in a number of other European cities, book your tickets NOW for next year’s May event.
Dates for next year’s event will be posted by the French Ministry of Culture (probably by mid-January 2009).
>>More on Paris Museums