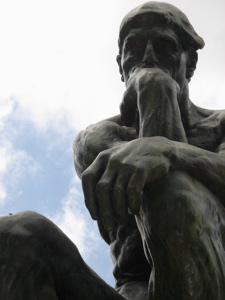 Morning: Rodin Museum
Even though three of us out of our group of five have visited the Rodin museum in the past, we’ve agreed unanimously to return for a second (or third, or fifth) look. If you’re staying in Montparnasse, getting to the Rodin Museum is a piece of cake. Hop on the #13 line at Metro: Gaite. Get off at Metro: Varenne. Exit at the clearly marked exit for the Rodin Museum. Once again, we’re able to sail past a huge line of visitors waiting to buy tickets because we have our Paris Museum Pass. (The pass however will not allow access to the Camille Claudel temporary exhibit).
Auguste Rodin, a 19th-century sculptor, continues to fascinate 21st-century visitors because his work expresses power, motion, and lyricism. Even his ‘Thinker’ who shows no inkling whatsoever of getting up to offer his seat to any of the passersby, implies power, simply by sheer mass. 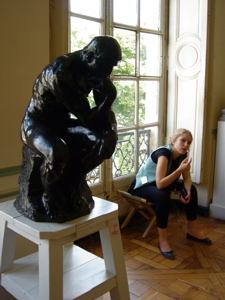 Like the impressionist painters, Rodin also experienced his share of opposition and criticism for his work during his day. Even though he received commissions to create pieces for Paris landmarks i.e his statue of Balzac which eventually ended up ornamenting a median near Blvd. Raspail and Montparnasse intersection (Metro: Rennes), it took years before the statue was actually approved for this locale in 1939.
The Balzac statue was described as an ‘obese monstrosity’, a ‘colossal fetus’, a ‘monument of insanity and impotence’. Artists lovers were encouraged to ‘take a pickaxe and smash the shameful block’. 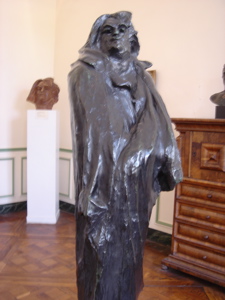 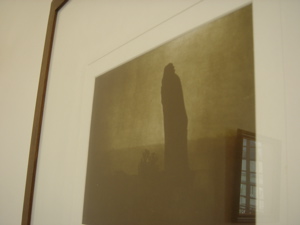 Rodin put a great deal of thought into this work. To begin with the Balzac statue is totally imaginary – he never met Balzac who lived 50 years before his time. However, Rodin went to great extremes to recreate Balzac’s proportions – even to the extent of tracking down Balzac’s tailor, and getting his dimensions. Then he finally ended up draping a cloak over the originally nude Balzac study. When you’re at the Rodin museum, be sure to take a look at the photograph of the cloaked model. The model looks more like a stonehedge rock than an actual person.
In Frederic V. Grunfeld’s article, Rodin’s Balzac (Horizon Spring 1976) it’s suggested that Rodin went one step further in emphasizing Balzac’s powerful talent as a writer. Let me put it this way. Underneath his heavy cloak, he’s not holding onto his pen.
Here is what Rodin had to say about his Balzac statue: “Nothing I have ever done has satisfied me so much, because nothing ever cost me so much; nothing sums up so profoundly what I believe to be the secret law of my art.”
(If you haven’t read Grunfeld’s full article, please do so!)
Where there’s Rodin, there’s always bound to be controversy. Whether it’s discussion of his personal life with one of his most famous students – Camille Claudel or questioning the techniques he used to create such life-like subjects – few would argue his talent. 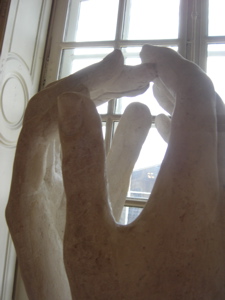 When you get to the second floor, you’ll note that there’s a smaller version of ‘The Thinker’ on the second floor. Once a friend told me that this was the ‘original’. In truth, all of the cast statues are considered ‘originals’ – those that were cast by Rodin (or more specifically, by his ‘patineur’). The ‘original’ clay model is not to be found at the Rodin museum. However, I’m told by one of the museum guardians that the ‘original’ clay model of The Thinker may be at the Rodin museum in Meudon, France.
Now that I’ve had an opportunity to compare Carpeaux and Rodin, I have to say that I will stick to my theory that Carpeaux succeeds better at capturing ‘joie de vivre’ particularly in the faces of his women. Rodin’s male faces are extraordinarily expressive and dynamic whereas his female models more often define themselves by their stance. (These are just personal observations – I’m not an art expert). 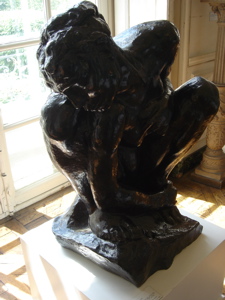 An added plus of visiting the Rodin Museum in June is the profusion of roses that frame the outdoor statues. A café in the gardens behind the museums provides a shady spot to finish off your visit.
Rodin Museum
Hotel Biron
79 Rue de Varenne
Metro: Varenne
CLOSED MONDAYS.
75007